Bike Drawing in 2 variants will tell in this article! Touching upon history, it is worth noting that mankind has been riding the forefather of the modern bike since the early 19th century. It was then that the famous German designer Carl Drez invented the machine remotely resembling a modern bike. It was quite an eccentric technique, in which the main driving force was the legs. The inventor named his design “Machine for running” (German: “Laufmaschine”).

The design of the early nineteenth century was really something similar to the modern treadmill. Today, a similar invention is used to teach a child to keep his balance. The child, riding without the help of pedals, independently sets in motion the design, pushing his feet off the ground. Thus, you can teach a child to ride a bike. Bike in the form in which we are accustomed to seeing it appeared in 1884. An English designer, named John Kemp Starley, improved on Carl’s invention. His final version, to a large extent, resembled a modern machine. Unlike its predecessor, the bike was equipped with a chain drive.

Bike Drawing is easy enough the main thing is to listen to our advice! The vehicle was driven by a man between, equally sized, wheels. Later, cycling became very popular and mass production of the bicycle began. The design and manufacturing materials were improved and refined. Today, everyone can find a bike that will meet the desired requirements and be suitable for the necessary tasks.

A bike is an indispensable developmental attribute for a child. Everyone remembers learning how to keep their balance. When an important adult explained how not to look under the feet or how to brake. It is very important to learn this from an early age. After all, it is at this age that information is absorbed best. And it is during this period that a child’s desire to discover a healthy lifestyle is formed. A children’s bike helps a child to develop harmoniously. 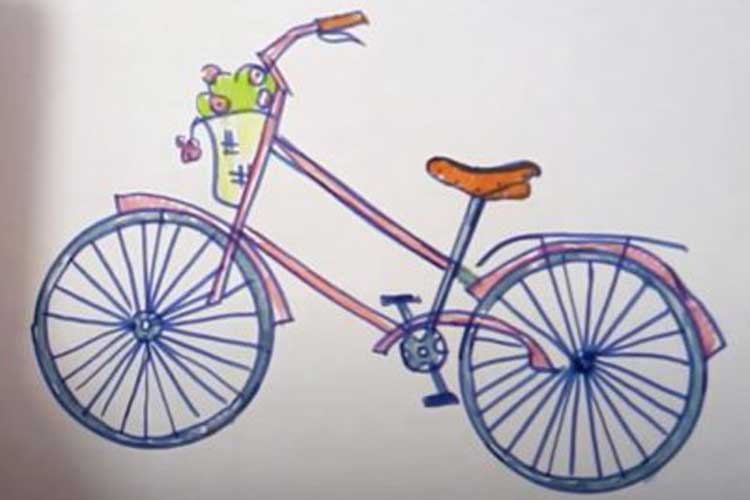 What you will need

Place the glass with its neck down on the paper. Draw around with a blue felt-tip marker. This is the front wheel. On the side, draw a second circle. Take a little distance from it and draw a small circle. He will help outline the bicycle star.

Inside the small circle, make a dot, and near its contours, make arches. Let out an upward sloping strip from the figure. Above the bicycle star is an arc. Show rounded hubs in the wheels. From the element on the left stretch parallel broken lines. At their tips at the top is a handlebar with rectangular handles. 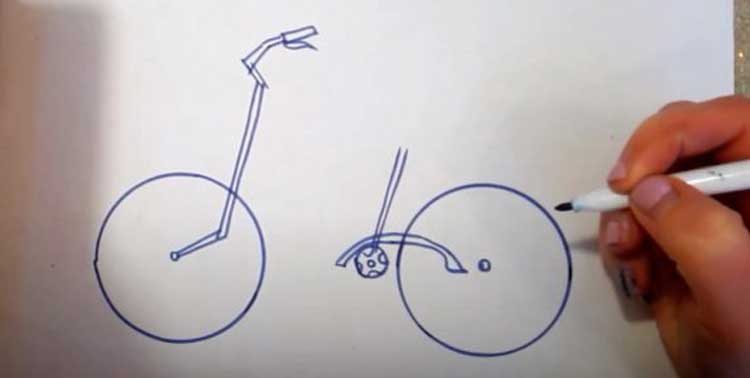 The saddle resembles a curved triangle. With oblique strips, mark the frame. Inside the wheels, make a large circle – so you show the borders of the tires. 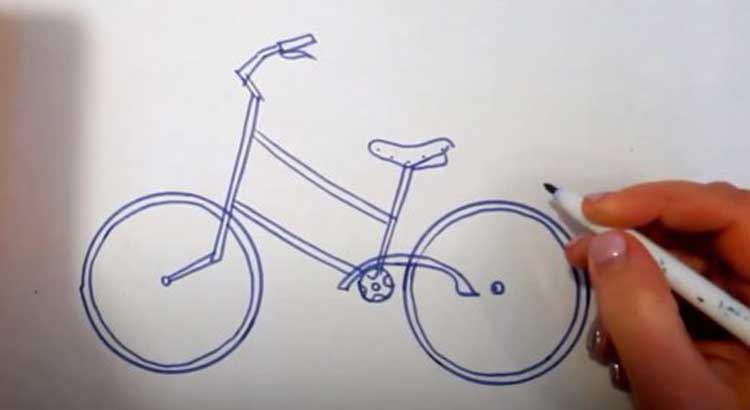 Inside the wheels, draw the spokes, and above them, the wings. They are shaped like elongated curved rectangles. The trunk is an inverted triangle with a long base. 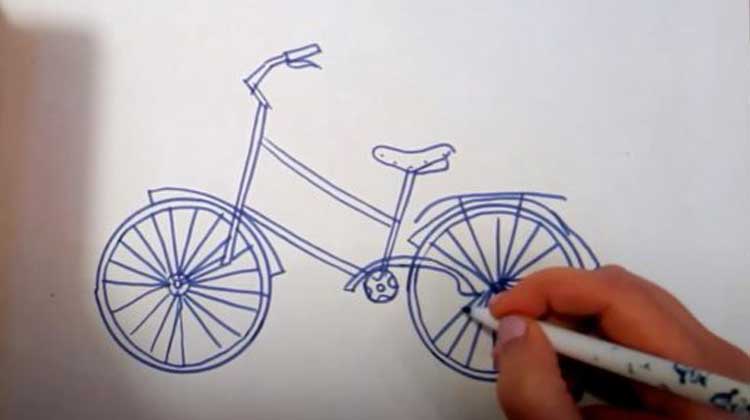 To depict the basket, under the handlebars, outline the half of an inverted trapezoid. The weave texture is indicated by small intersecting strokes. Schematically draw the flowers. Add pedals – these are small strips with rectangles at the tips. 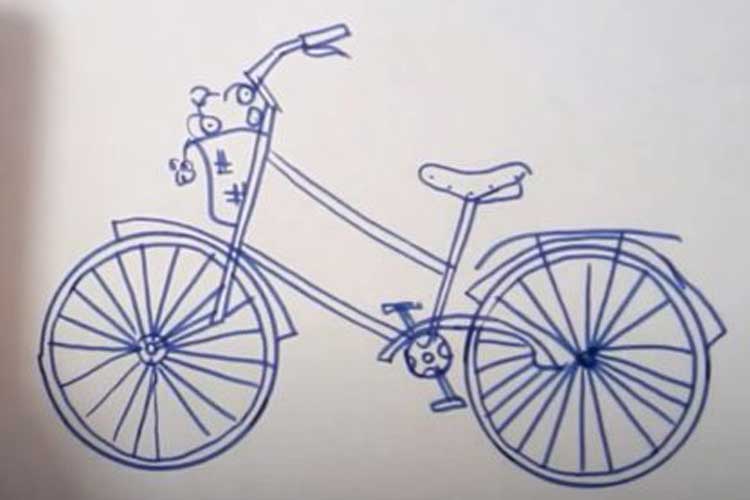 Paint the frame and shields over the wheels with a pink felt tip pen. Use a gray shade for the tires. 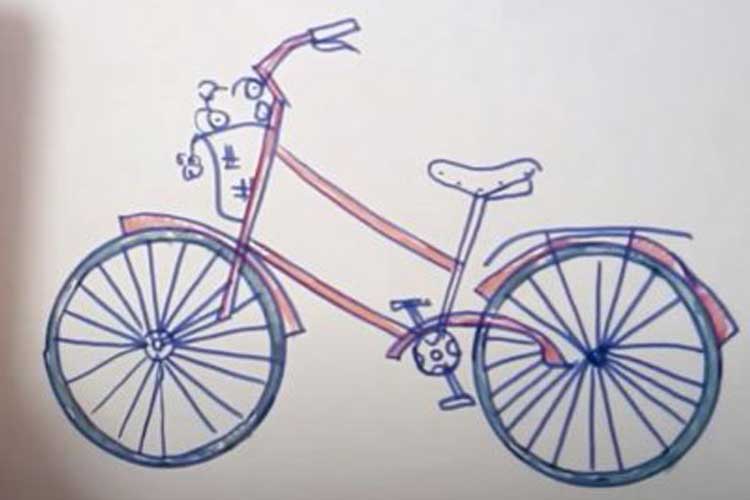 The saddle and handlebar grips in the example are light brown. If you don’t like that option, take any other color. Make the basket yellow. For colors use green and pink shades. 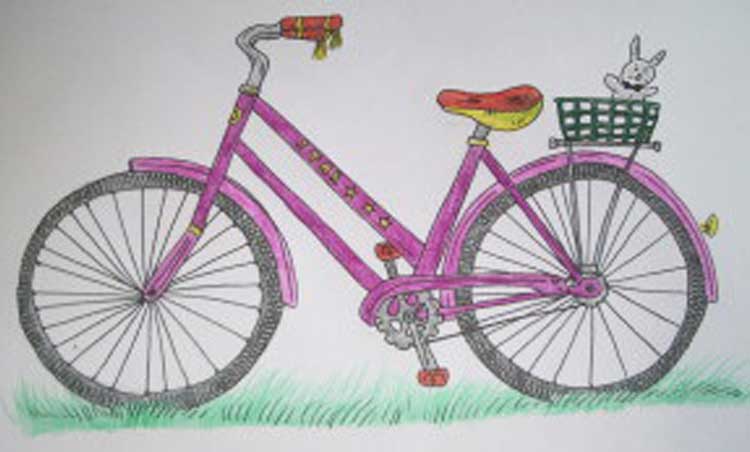 Before drawing a bicycle, you should prepare

To learn how to draw a bicycle with a pencil, you should divide the process into separate steps: 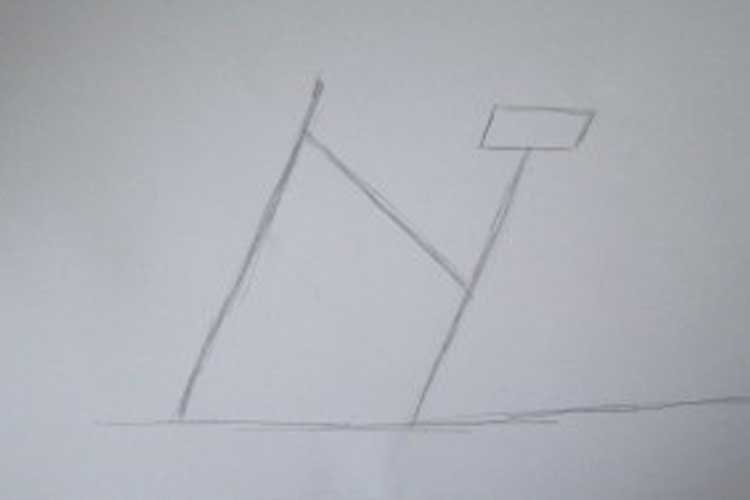 2. Draw two wheels in the form of circles. To facilitate the task, you can use a ruler or a compass 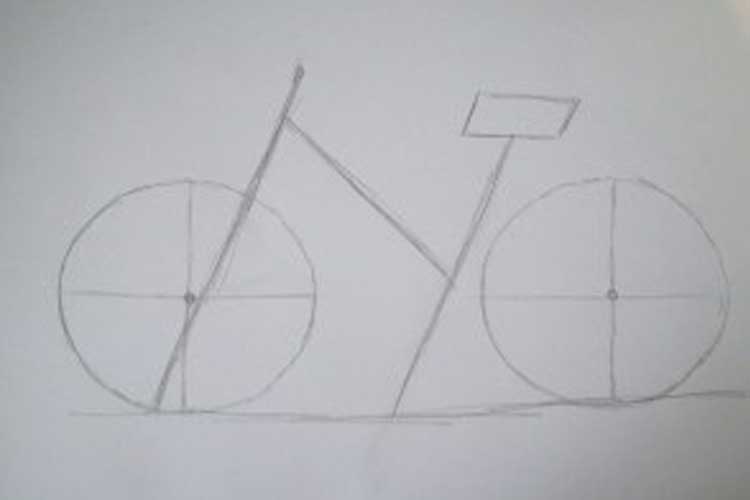 3. Draw the handlebar and the front wheel of the bike 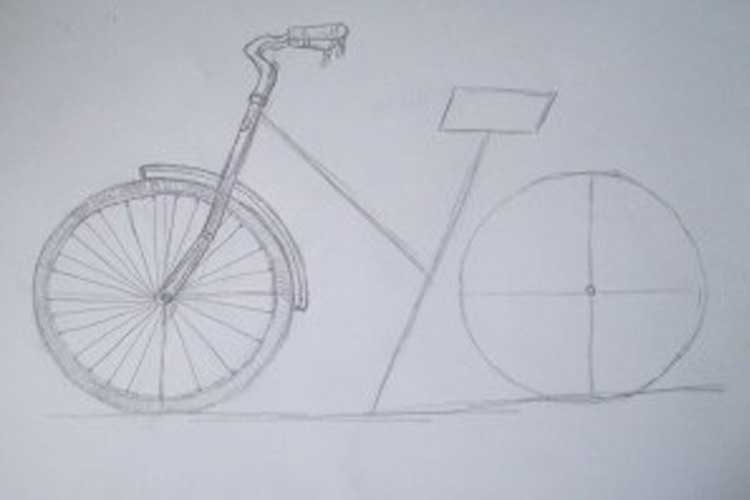 4. Draw the middle of the bike, seat, and pedals 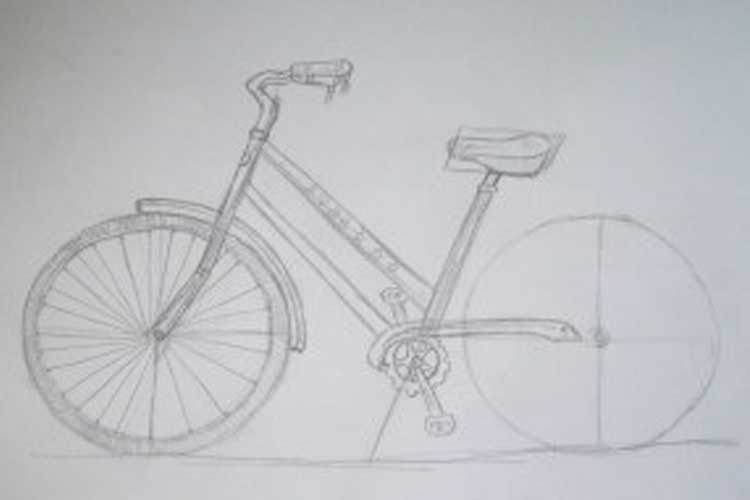 5. Draw the back of the mechanism 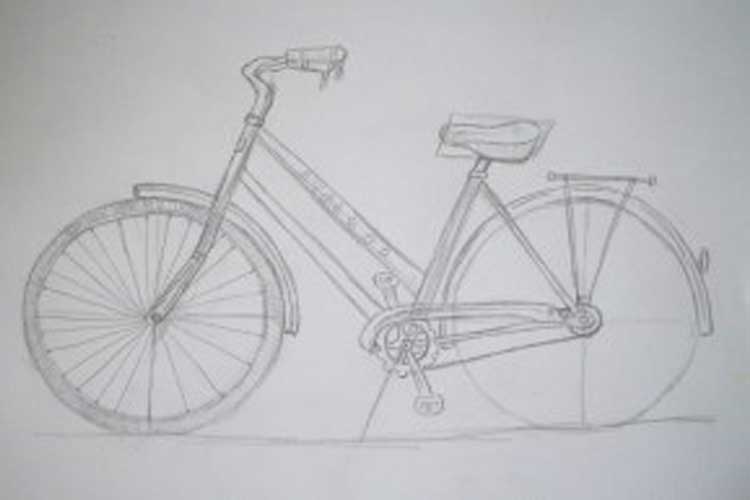 6. Draw the rear wheel of the bicycle 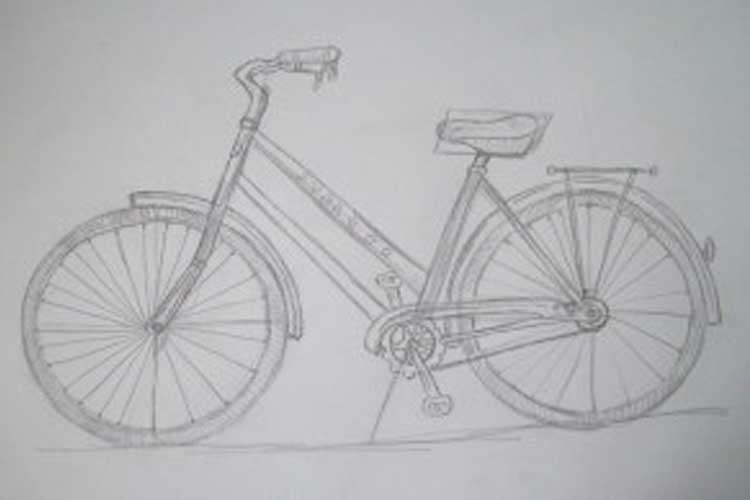 7. Above the back wheel, draw a basket and a toy bunny 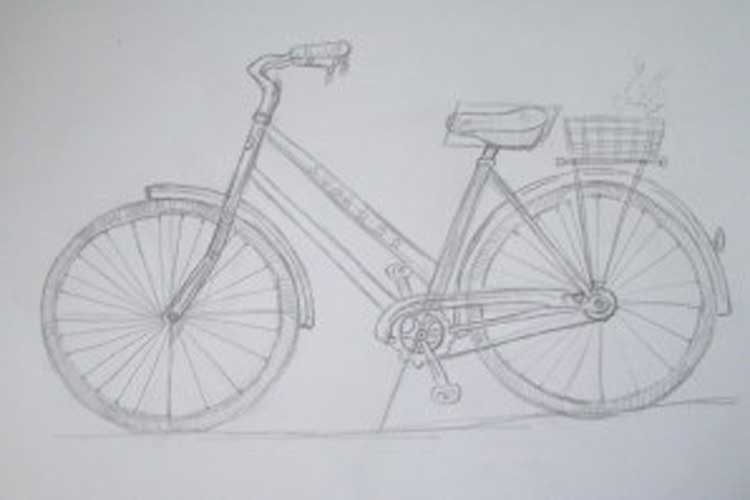 8. Now you understand how to draw a bicycle with a pencil step by step. But to finish the image, you still need to paint it.

First, trace the sketch with a ruler. 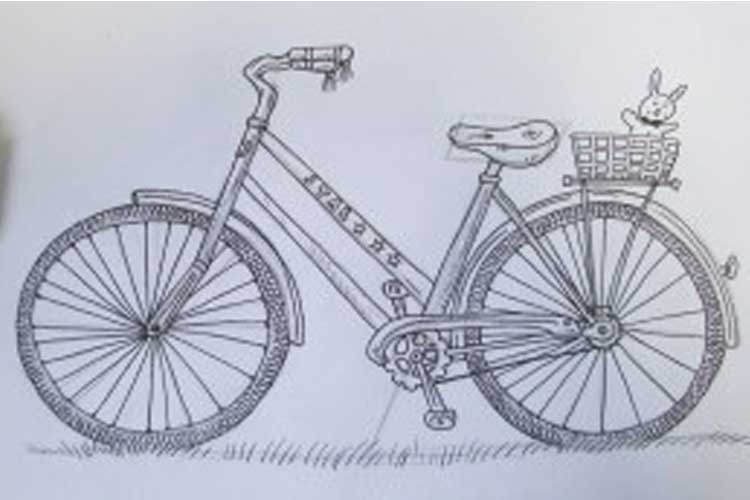 9. Erase the pencil sketch with an eraser 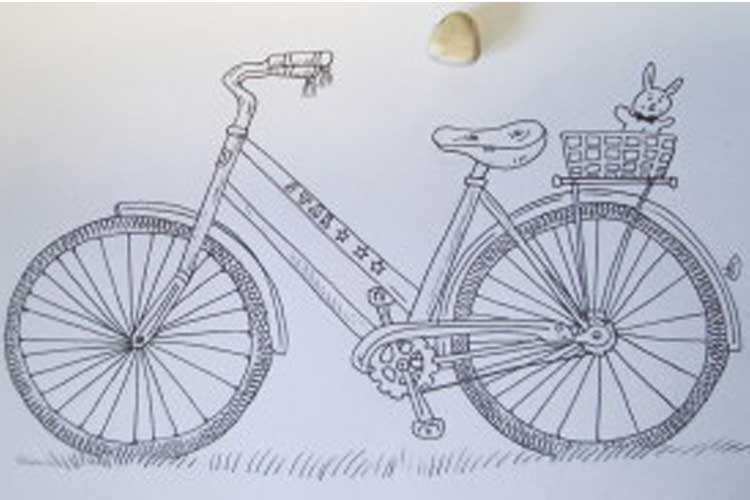 10. Tint the bunny, the wheels and pedals, the steering wheel, and the trunk with grey. Paint over the grass in green; 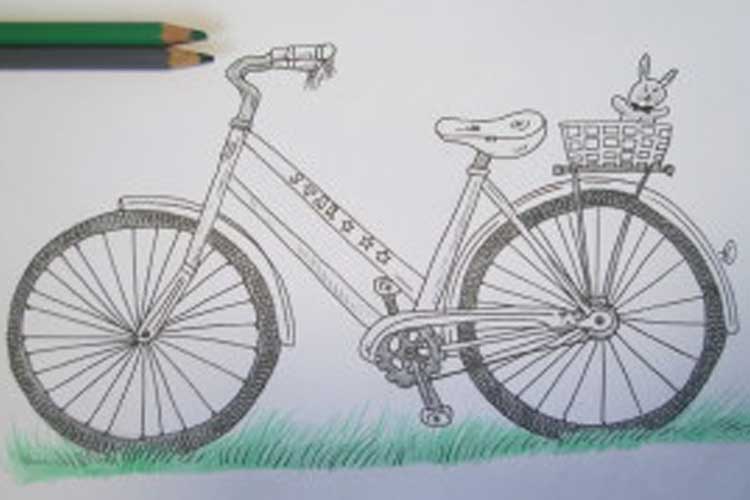 11. paint small details in yellow. Color the main part of the bicycle in bright pink 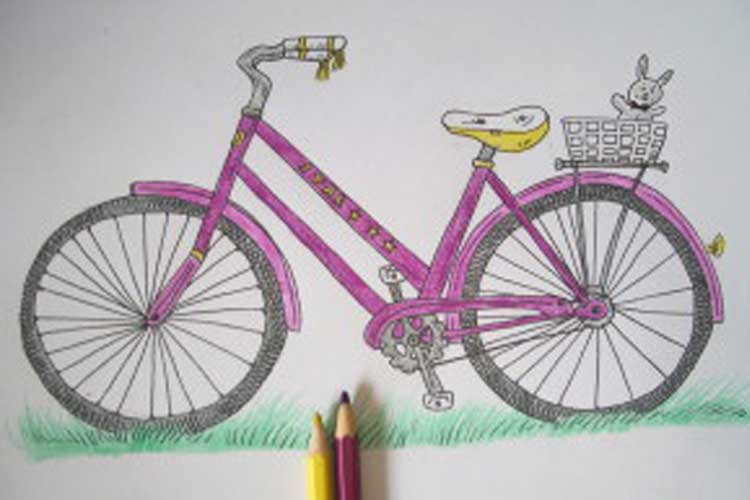 12. Green for the basket, and brown for the handlebars, pedals, and seat. 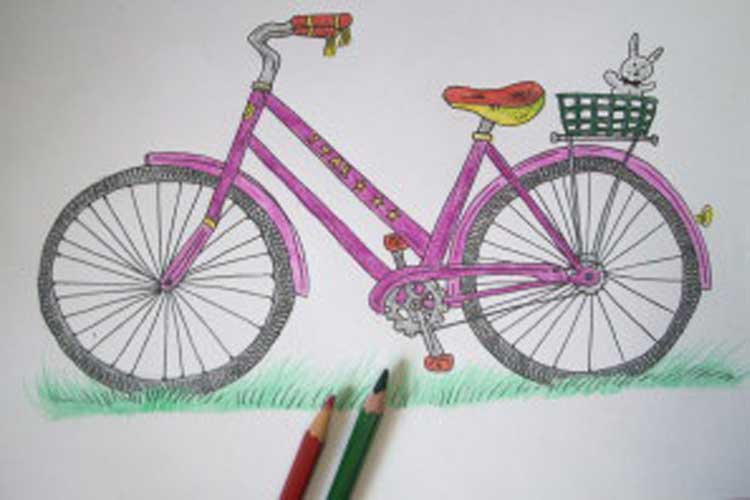 You are ready to draw a bicycle! Knowing how to draw a bicycle step by step, you can create an original postcard or a painting. Drawing a bicycle is possible not only with pencils but also with paints and bright felt-tip pens. Carefully studying the device of the bicycle, you can draw a variety of models of this very common means of transportation. And you can draw a real bicycle race, depicting the athletes on bicycles. Drawing absolutely any bicycle, you can use it as an auxiliary tool ruler, as well as a compass. After all, bicycle wheels are round, and therefore it is quite difficult to draw them the same and flat.