How to draw fire flames easy step by step

How to draw fire step by step! Let’s draw some fire to warm up! In this tutorial, I will show you how to draw a candle flame, a campfire, and a thrown flame using a few simple tools. The symbol of coziness and home is a fire. His warmth and bewitching glow lulls and brings peace. He was revered from the earliest times, so they stored a ray in each family so that with new rays of the sun he could revive him to live. How to draw fire, that with the help of well-known techniques to transfer all the power of the flame and the weightlessness of its sparks? This will help a specific master class. So, we prepare a working area, a paper, and the necessary tool. 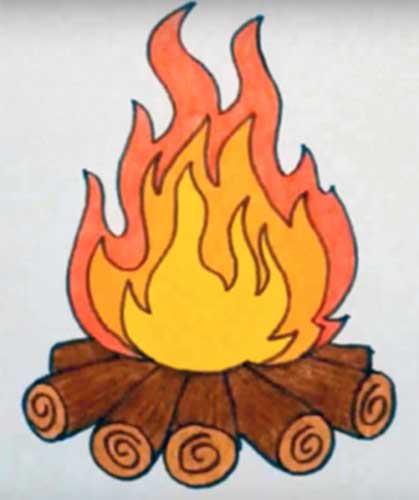 Now you can figure out how to draw fire in stages. The result is a wonderful flame. We begin the figure of fire, which occupies the entire leaf. At the bottom, it is uneven, smoothly bends upward and is divided into seven languages ​​of different thickness and length. 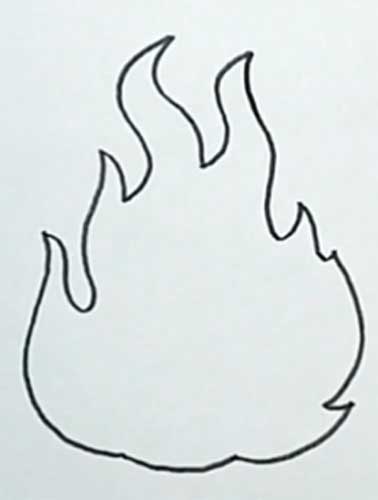 In the foreground in the middle of the big fire draw a small figure. It consists of 5 languages. 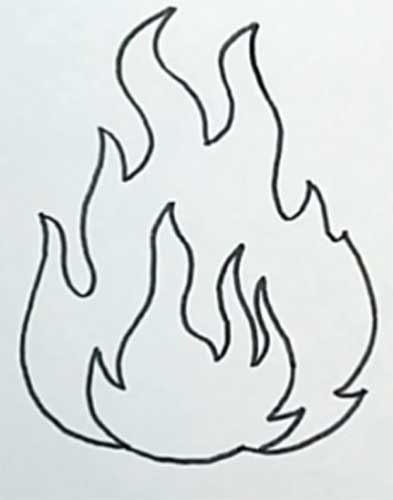 For the scale, add a third flame, which should be placed between the two drawn. It consists of 6 languages. 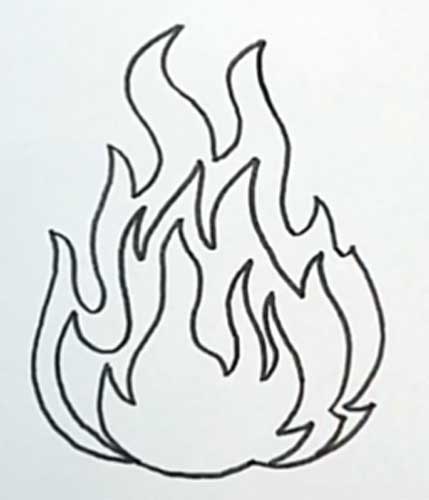 It remains to throw firewood on the fire. Draw 5 rounded elements with curls on the ends and two add on the sides. 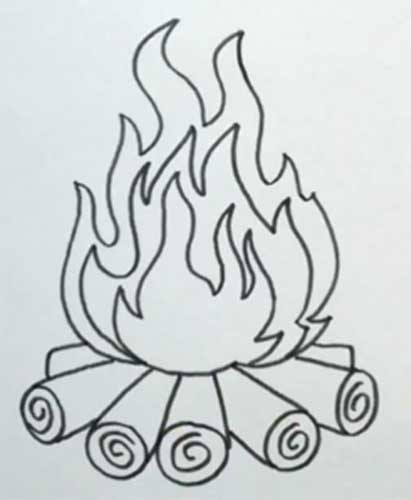 Add color to the picture: the log is made brown, and the rounded plane is painted brighter, the flame will have three shades (yellow, orange and reddish).

Forest option how to draw fire 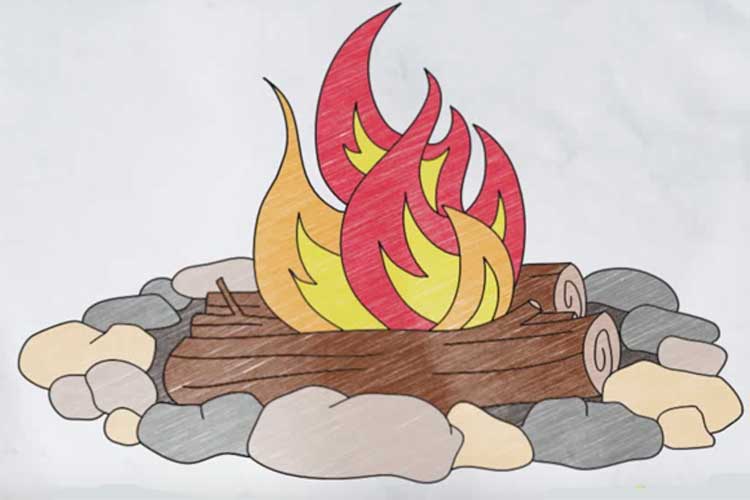 Each time you need to complicate the technique of drawing and the composition itself, so consider a more complicated version of how to draw a bonfire in the forest. It will be fenced with stones so that the flame of fire does not spread to dry grass, which is fraught with the onset of a fire. On the sheet follows an easy movement of the pencil to limit all future zones, which in the future will need to be detailed. Draw an ellipse in the center of which horizontally place three rectangles, and above them draw five flames. 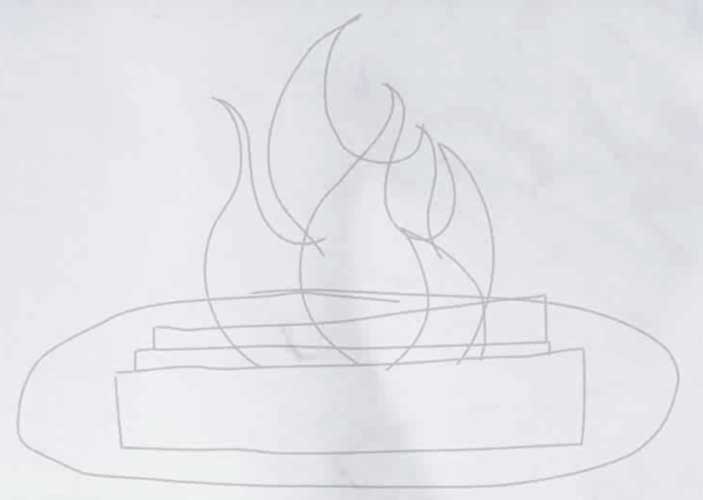 On the front line of the flame, we draw stones with clear lines. 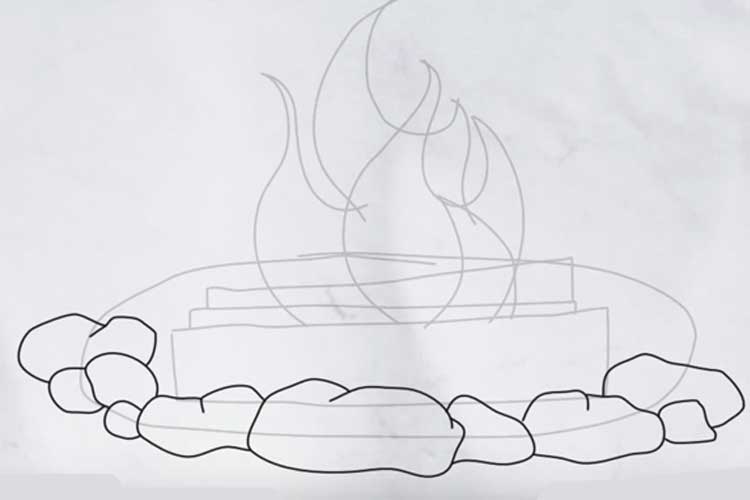 Behind them we lay a thick and round log with a knot. We are setting the flame of fire. 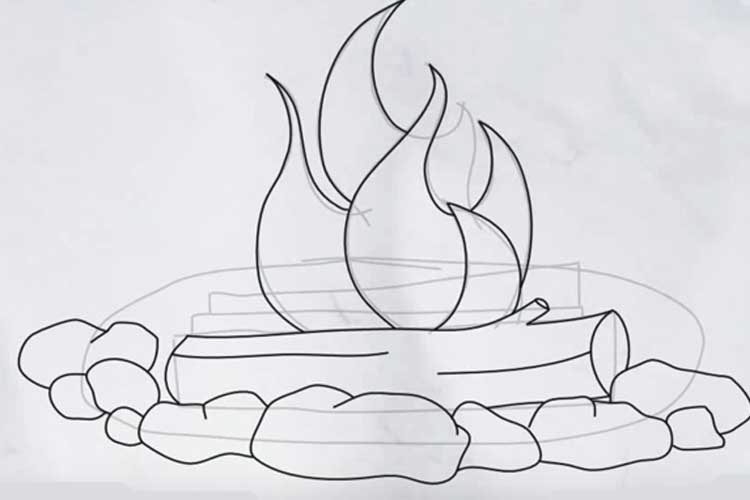 We finish the stones in the background. Beyond the plane of fire we draw another log, and the third is placed on the left between the two previous ones, we add a knot. On the right we make out a small piece of log. For realism, we add a few more fire languages. 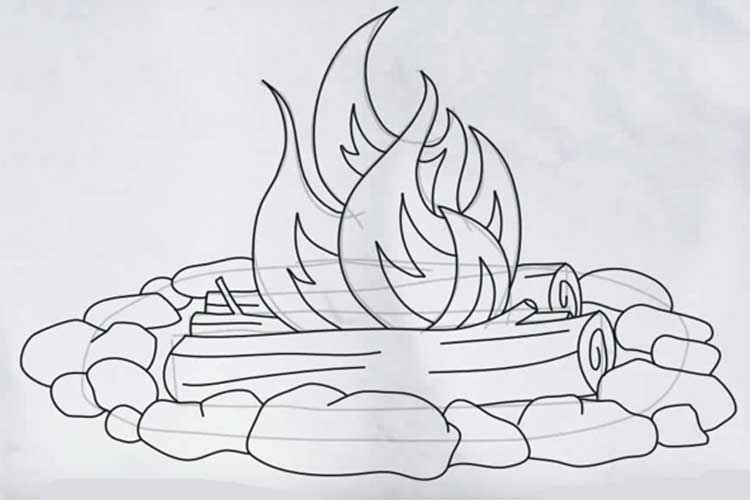 The color helps to breathe life into the drawing: we paint the stones with shades of gray and brown, the log is made dark, and its end is light, the flame will be yellow, orange and red.

Bright hearth How to draw Bonfire 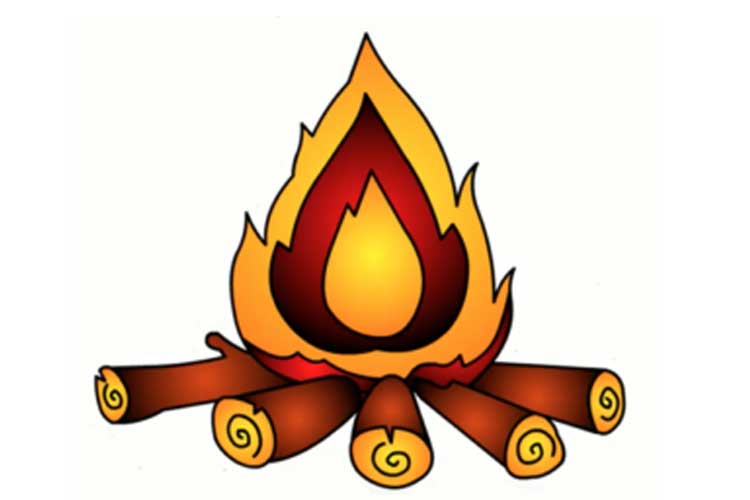 Another attractive option, which differs little from the previous ones, but still looks somewhat different. So, you need to draw fire with firewood. We limit the upper part of the flame, making it five languages. 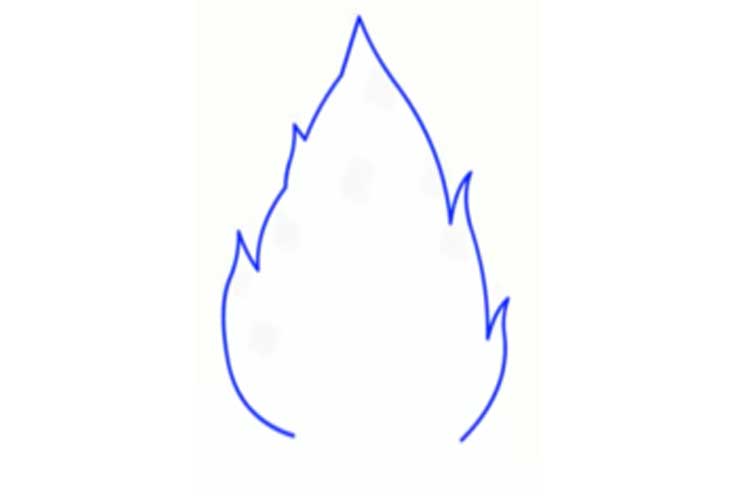 In the middle, by analogy, we draw two more of the same elements, reducing the number of languages ​​to 3, and then to 2. 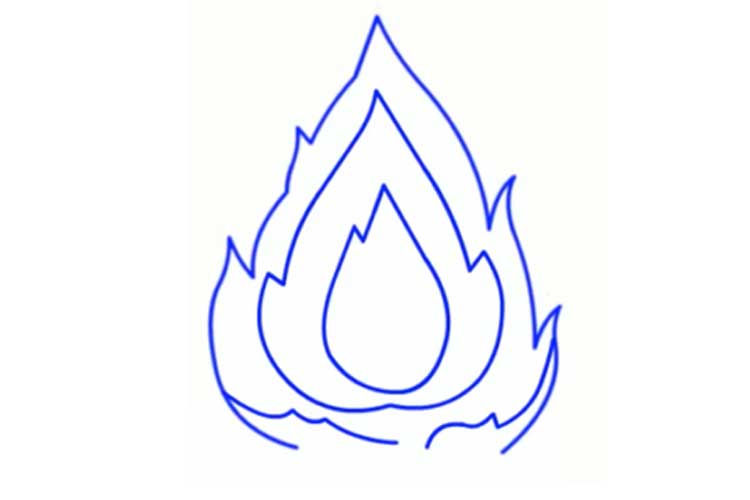 Now, to the forefront, put forward a boundary of 5 pieces of log. 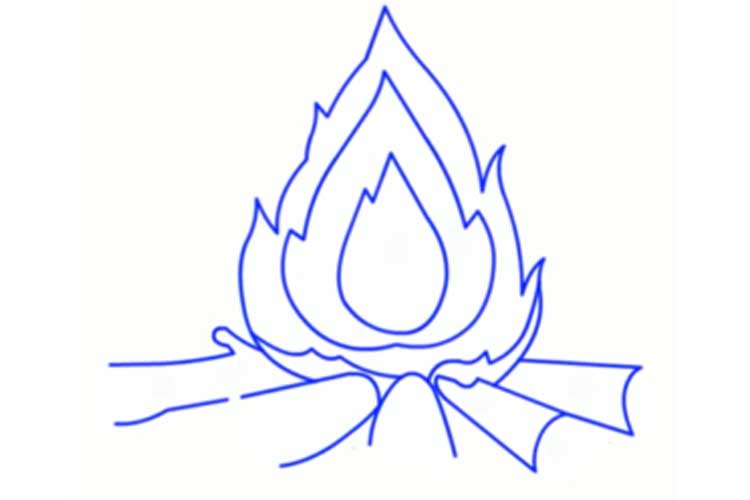 At the tips of the firewood, we finish the curls. The drawing is ready. 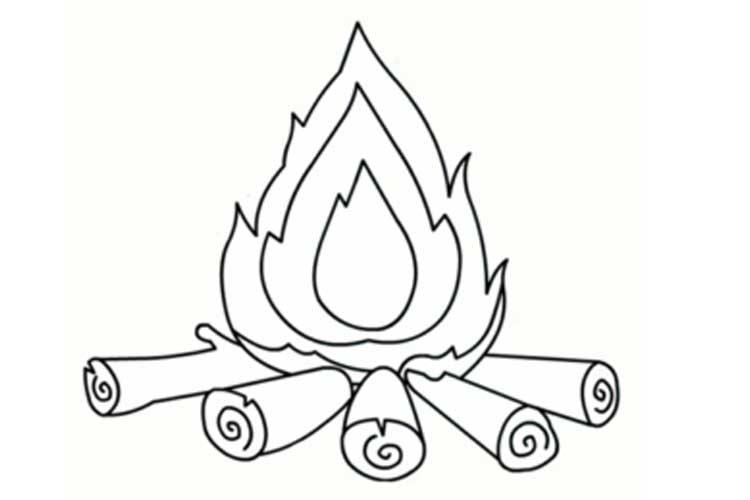 We paint the elements a little in other colors than in the previous versions. It should be juicy shades of brown and yellow. The log should be lighter at the tips and darker along the entire length. Fire in the foreground and background is done in yellow, and in the middle, we paint in a dark claret-brown. As a result, a live fire with firewood is ready in the picture. 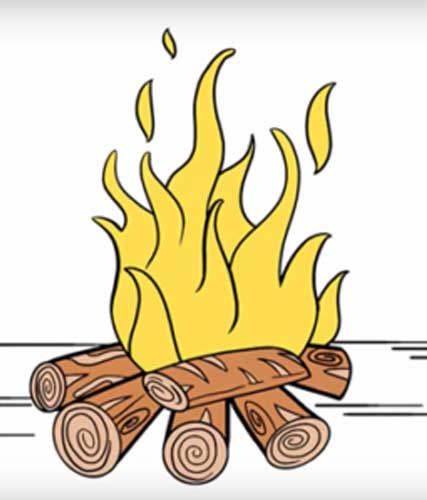 We begin work with the cartoonish image. Here you can figure out how to draw fire with a pencil. At the bottom of the sheet, draw a rectangle that will be an auxiliary element. Without leaving its borders, from the center of the upper side of the figure we draw rays (9 pieces) in different directions. They will limit the log, which should be 5. 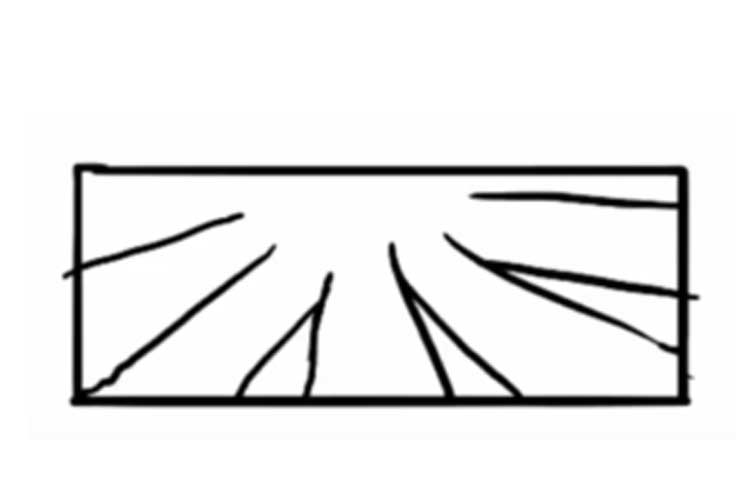 We wipe the frame. 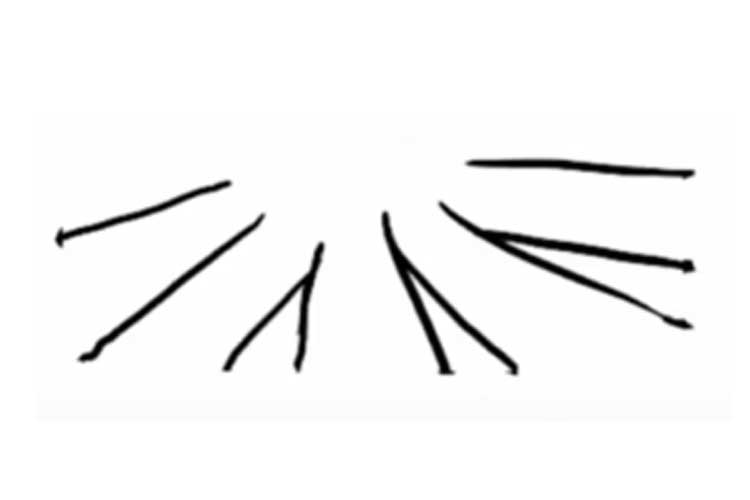 At the ends of the four sticks, we finish the circle, thus connecting two straight lines. The result is a cylinder. In the middle of each ring, draw small concentric circles. Since the right element is directed to the left, we do not see its final plane.

On the log in the center, we draw a flame of fire. From below the figure is round, and from above has three teeth. 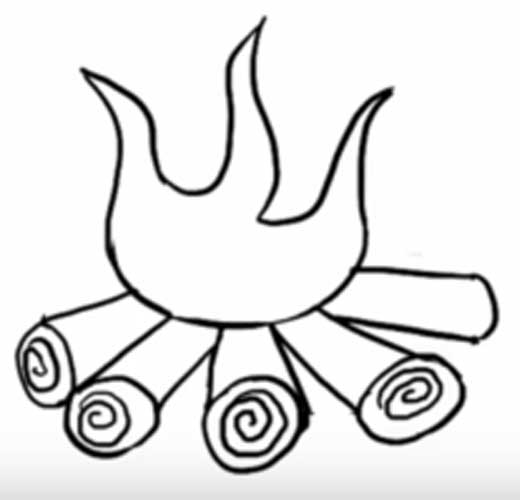 For realism, we make another two behind this flame. We have their teeth in the free area between the first ones and stretch them slightly upwards. On the left above the fire, we add a spark. 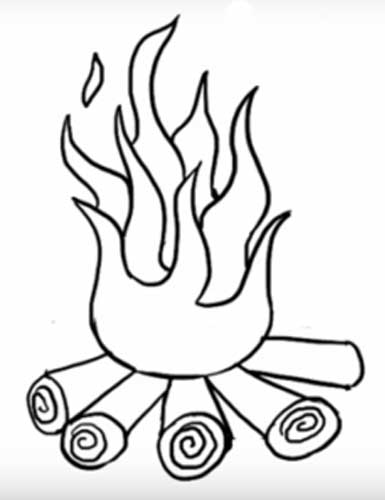 Final touches: we draw another two sparks, draw up separate tongues of fire in the foreground on the left and right, add a small log at a slight angle. We restrict the surface of the plane on which the light is located. 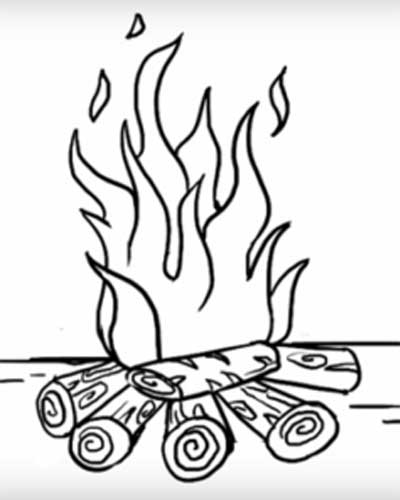 It remains to paint the log brown and the flame yellow.

Share
Previous How To Draw Cake: cool video and simple step by step
Next How to draw a shark