How to Draw a Cat Front View Step By Step

How to Draw a Cat Step by Step From Front View in 4 versions will be described in this article! The first historical facts about the domestication of cats came from the Middle East, the ancestral home of modern Anatolia. Not so long ago, joint burials of cats and people were found. In ancient Egypt, the cat acquired a halo of divinity, and some of the Egyptian gods supplemented their appearance with feline features. It’s easy to draw a cat from the front, and just the main thing is to listen to our tips!

Félis silvéstris cátus (lat.) – The domestic cat is a subspecies of the forest cat and today, like the dog, is the most popular pet in the house. Since ancient times, these creatures fell in love with people for their graceful appearance, wayward regal character, and ability to catch mice. The preservation of crop reserves was of paramount importance, so the cat became a necessity in the human dwelling. Drawing a cat in front view is different from drawing a side view, and here we will tell and show you why!

A cat is a creature with a wayward, proud character and very responsive to its owner’s caress. Kittens very quickly become attached to a person and actively play with him. Despite several thousand years of domestication, predatory instincts do not sleep, and on the street, even the most modest domestic beauty will start hunting birds with the help of fast paws and sharp claws.
So let’s get started drawing the cat’s front view now!

How to Draw a Cat Front View (option 1) 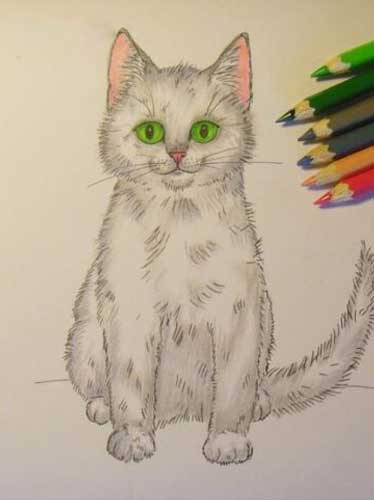 The easiest way to start drawing is from the face. 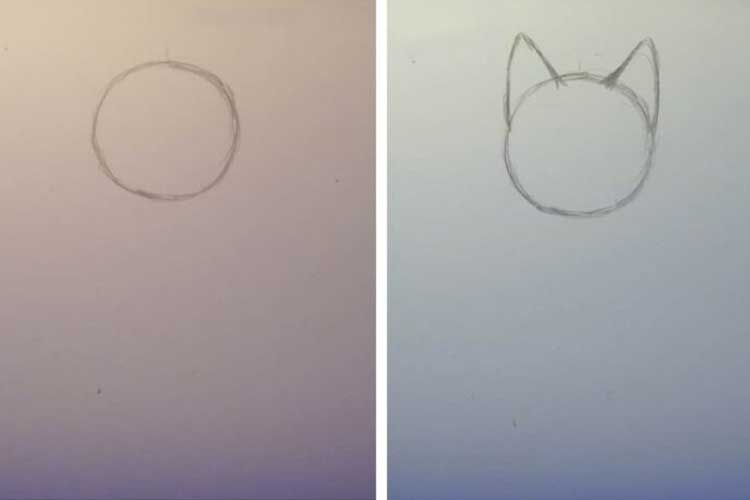 Draw a medium-sized circle at the top. On the sides, add triangular ears to it. They should be approximately the same size and level. 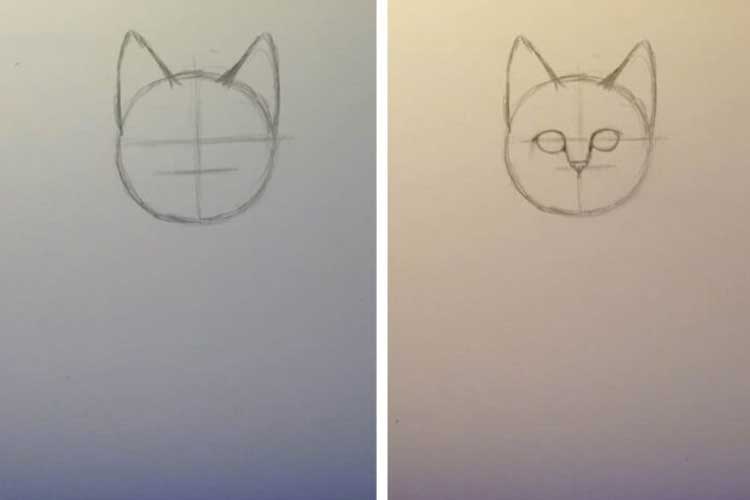 Divide the circle into four using lines. Below the center, we place another auxiliary line. The upper squares will help put the eyes; the center’s gap will be used for the nose, and below will be the mouth.

We insert two eyes in the prepared spaces. The distance between them is correlated with the size of one eye. Draw a triangular nose below. Using short lines, connect its edges with the eyes. Add narrow pupils inside and give the head a shape. 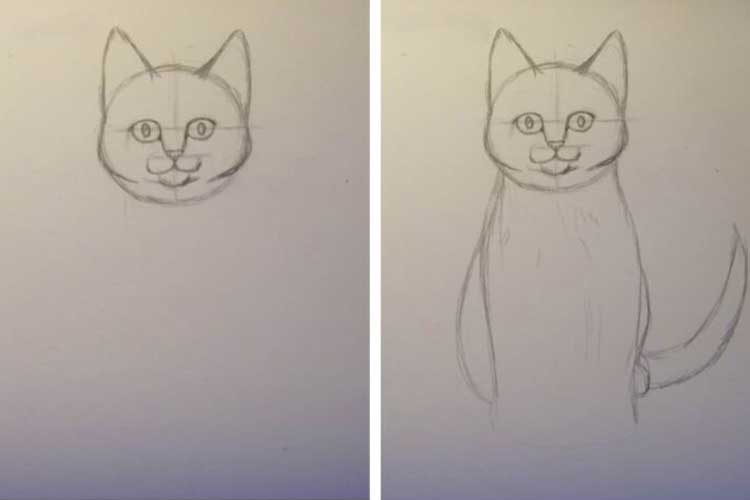 Below the head, we begin to draw out the front of the animal with smooth lines. We designate its back part with arcs, and an elongated tail pointed at the end.

In the front part, draw the legs in more detail, add fingers at the end of each, and paws in the background. We depict the hair on the tail with simple lines and randomly place it all over the body and muzzle. 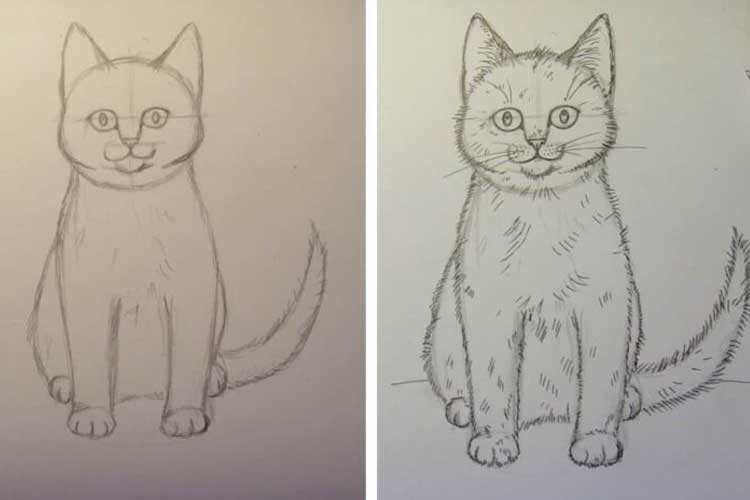 We outline the resulting contours with a pen or a liner. Erase the auxiliary strokes, add the mustache and eyebrows. We start painting. For eyes, you can use any green tone. 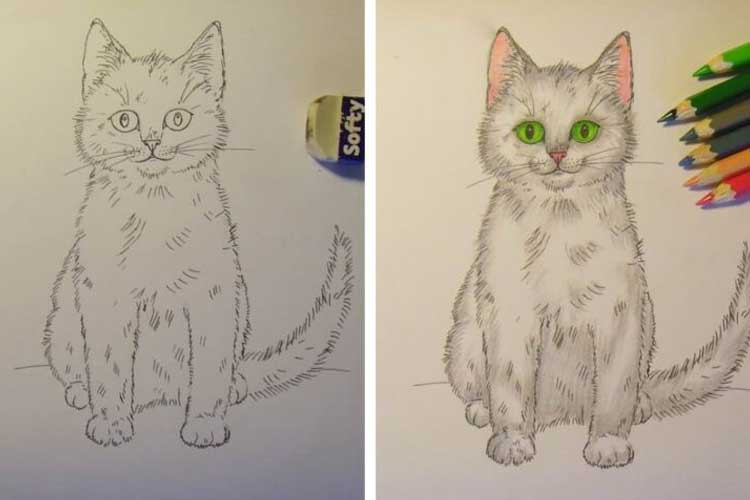 Shade the central part of the ears with pink. In some areas of the wool, we use gray.

It remains to create the background. Shade the lower part with a green shade; purple or lilac is suitable for the upper part. Your colors may differ from those suggested. Done, now you can draw your pet from life.

This pose is the most difficult to draw. The cat sits and looks at you, with its head slightly pressed to the ground. 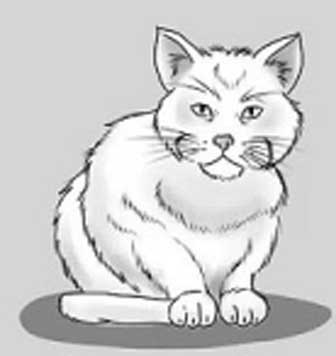 1. We need to draw three circles that will overlap each other. The smallest process is the cat’s face. We divide this circle in half; this is necessary for easy drawing of eyes, nose, mouth, and mustache. Next, draw the most extensive circle – the central body part. The middle ring, most of which is almost invisible, is the back of the body. 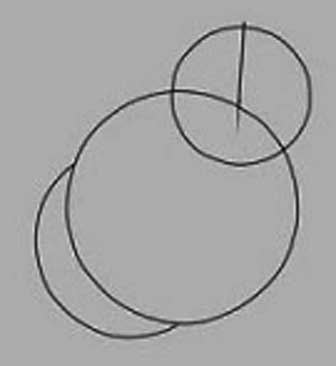 2. Divide the circle of the head in half again and add the ears. Based on our process, we make lines that will slightly increase the width of the head. Then we start drawing the cat’s mouth and nose. Don’t forget to draw two front legs and a tail. 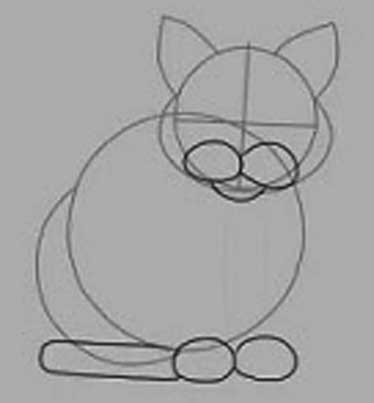 3. In this step, we draw in detail the cat’s face. We draw eyes, nose, antennae. We draw the fur, as shown in the picture, and draw the ears. 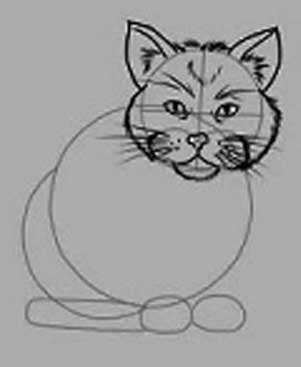 4. Working on the front legs and tail. We draw the legs closer to the side of the head and cover them with wool and draw the claws. Cover the tail with wool. 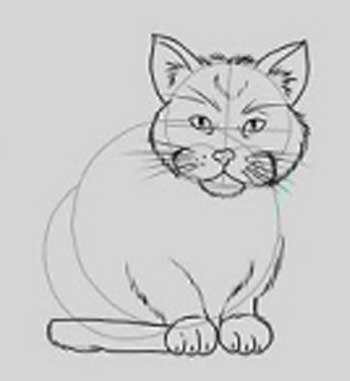 5. We finish our drawing. Remove all the auxiliary lines, cover the cat with fur, and add shadows.

Our cat is ready!

How to Draw a cat side view (option 3) 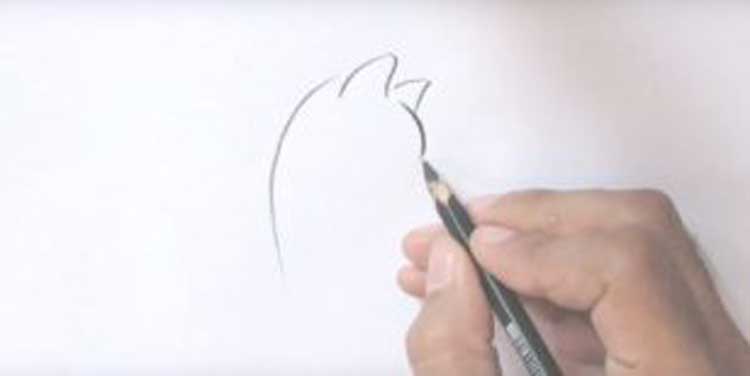 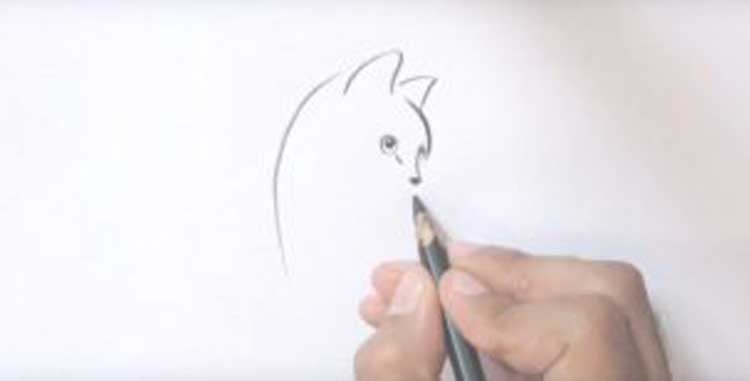 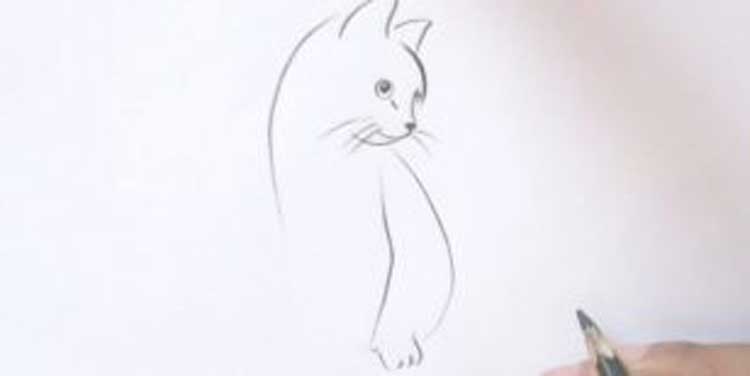 6. Make the back and necklines bold and divide the right ear in two. 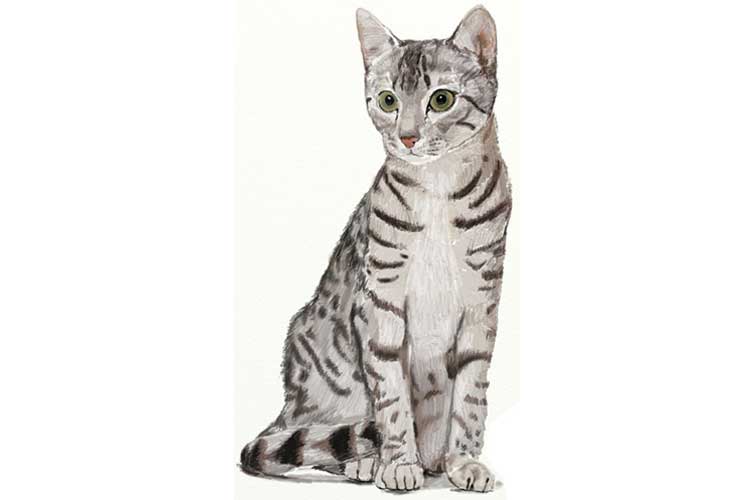 1. Simple contours of the shape of the torso and head 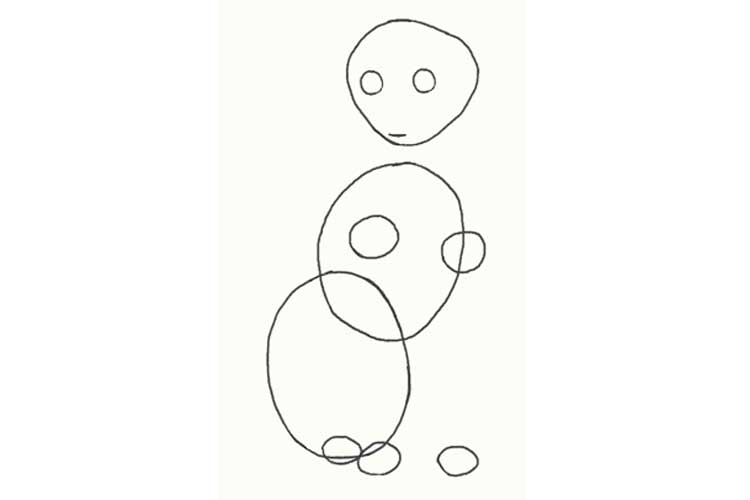 To make it easier for you to draw a cat, you first need to make essential but straightforward outlines. They will help you further maintain the proportions of the drawing. Freehand draw two overlapping circles for the torso and just above the circle for the head. Note that the outline of the head is tapered downward.

A cat’s muzzle is usually slightly elongated, while a cat’s muzzle is often round, like a saucer. Be sure to draw three small circles below for the cat’s legs and two circles in the body’s upper part.

2. We continue to draw the initial outlines 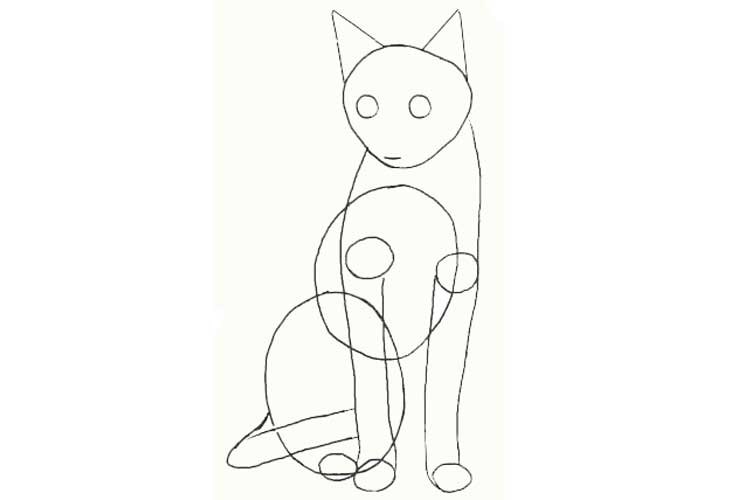 It is essential to draw precisely the first step; in the future, it will only be necessary to add simple details to these contours, and then, removing them with an eraser, we get a beautiful drawing of a cat. First, draw the vertical lines of the cat’s legs. This is not difficult at all; notice that they start from the neck. It is also easy to draw two-tail lines and triangular ears on the head.

3. Remove unnecessary contour lines from the drawing of the cat 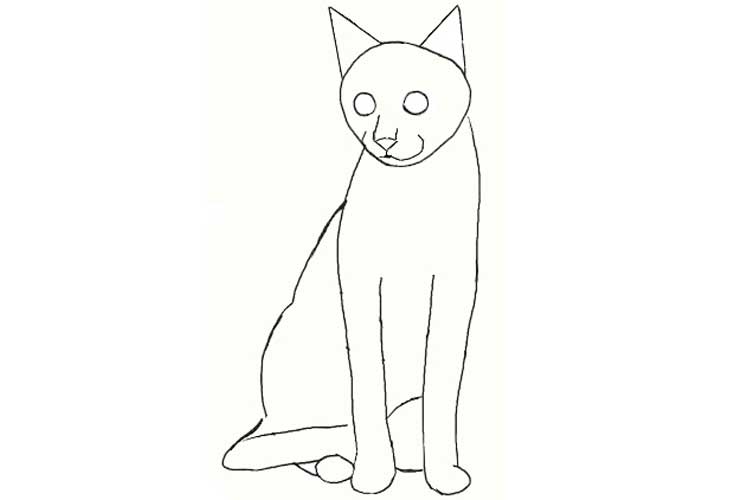 And now you can remove the extra contour lines from the drawing and look at our cat; we got a real picture of a cat. It remains only to draw the details of the face and body. You can see how easy we managed to draw a cat using the most straightforward paths. 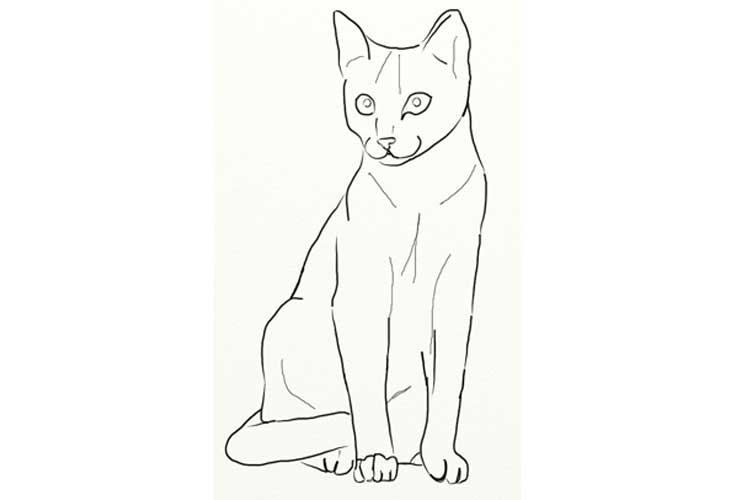 This step is not difficult at all; take a look at my cat’s drawing and add the necessary strokes. Do not forget to draw the eyes in detail and the claws on the paws. 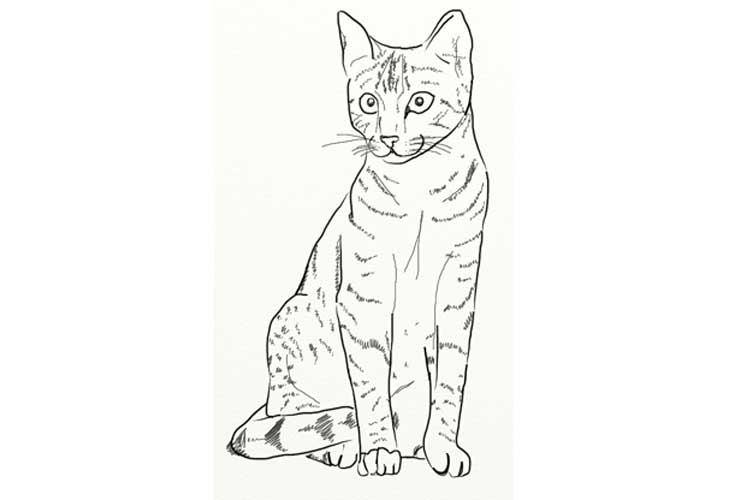 6. Drawing a cat on a graphics tablet

If you decide to draw a cat at first with a simple pencil and then paint with paints or colored pencils, you can use the coloring of this drawing of a cat, made by me on a graphic tablet.