How to draw a pineapple in stages

To begin with, let’s draw a pineapple shape – a rough, elongated oval and the upper part, where the leaves will be. Pineapple is an exotic fruit of a herbaceous plant with a no less unusual appearance. It has a bright characteristic taste and aroma; its flesh is extremely useful.

In this tutorial, we will explain how to draw a pineapple. Below are the various options: pencil and felt-tip pens, more complex and simple for children. Drawing a pineapple is an engaging and straightforward activity; the main thing is to follow our recommendations! 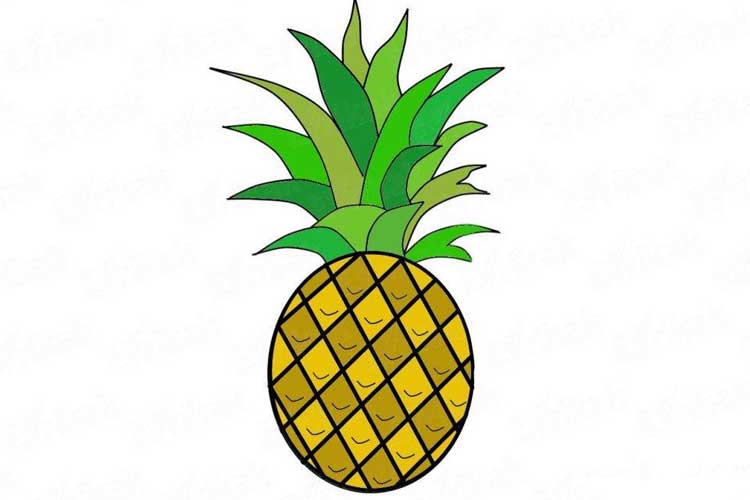 The foundation
First, draw the base of the fruit – an oval. The oval should be large and elongated vertically.

First sheet
Start drawing leaves on fruit. On the left side, draw a short curved sheet that ends in a sharp corner. 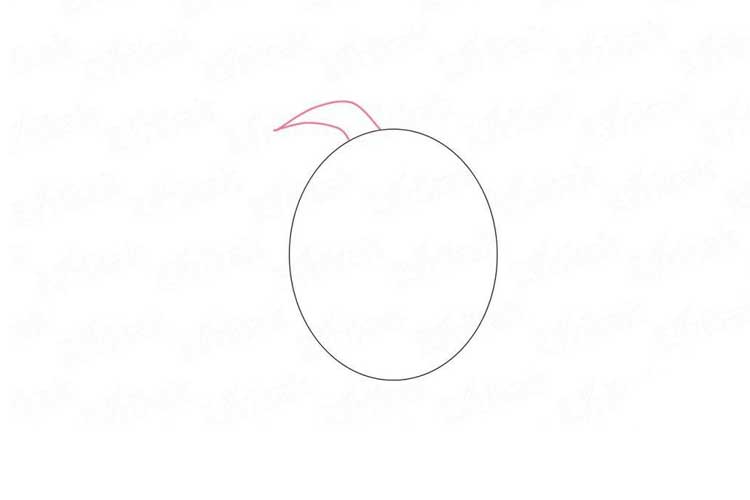 Second sheet
We draw the second sheet in the center, making it the shortest. It only bends down slightly. 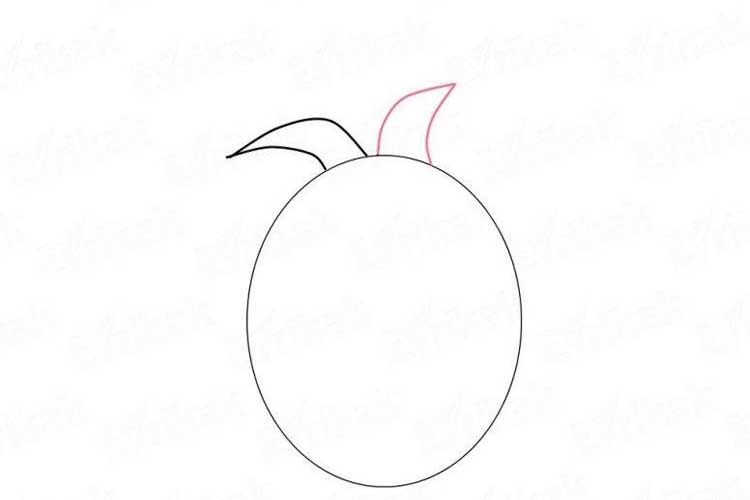 Third sheet
To the right of the center, we draw another one, but in the end, it is divided into two parts. 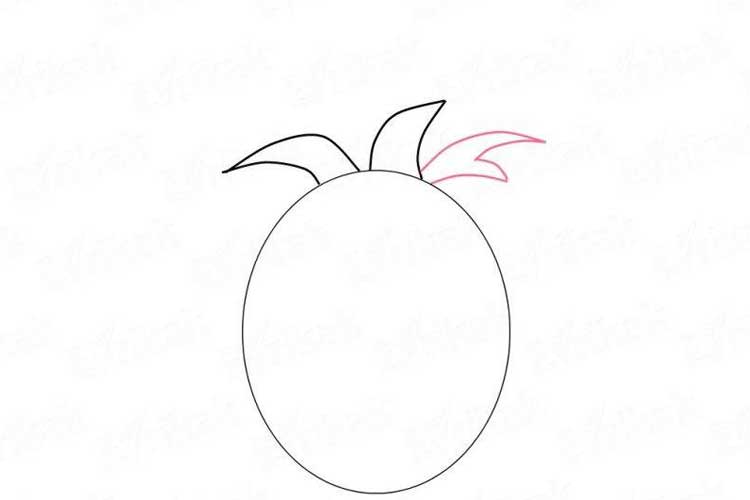 Bush outlines
From above the leaves, we draw curved lines, depicting the shapes of the bush on the pineapple. 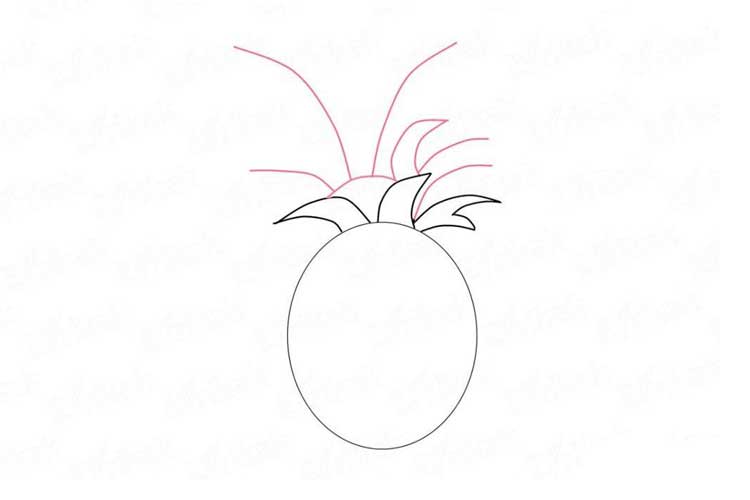 Bush
Next line turn into leaves. They are bent in different directions, but the blades that are in the center are directed upwards. 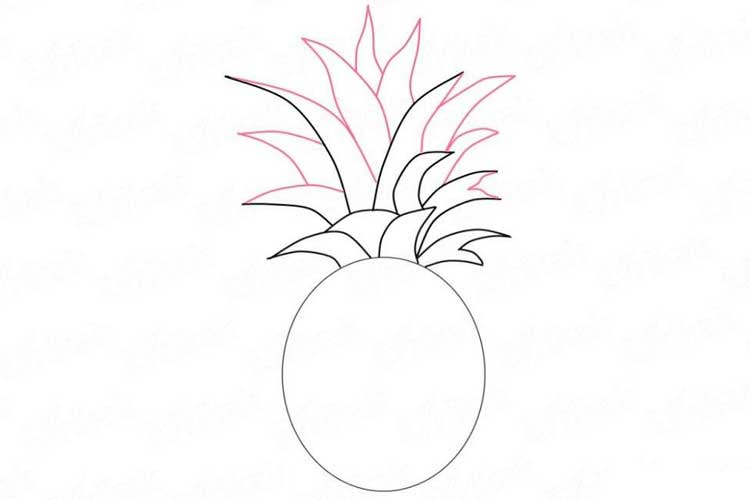 Parts of the fruit
On the very pineapple draw small cells. To get them the same, use the ruler. 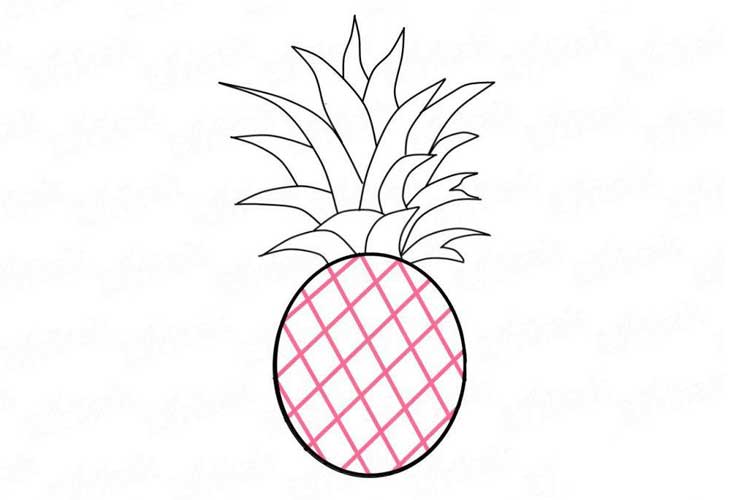 Small parts
In each cell, draw a small curved line that looks like a closed eye. 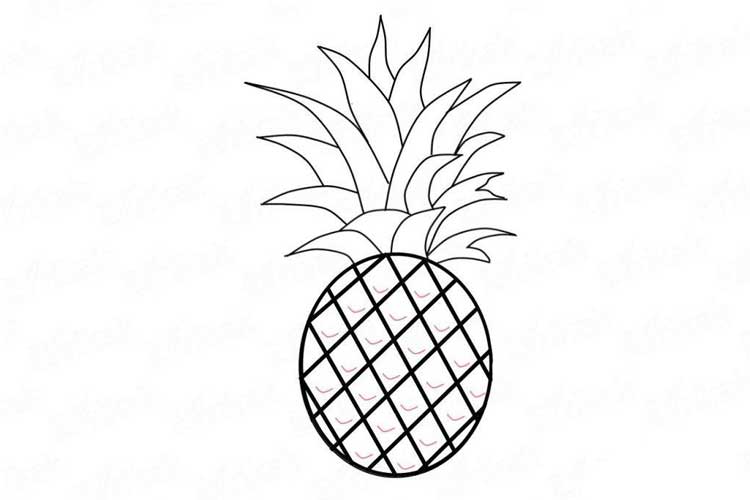 We colour
Colour the pineapple in shades of brown. You can paint in a checkerboard pattern: one cell is dark brown, the other is light brown. Paint the bush with green flowers. 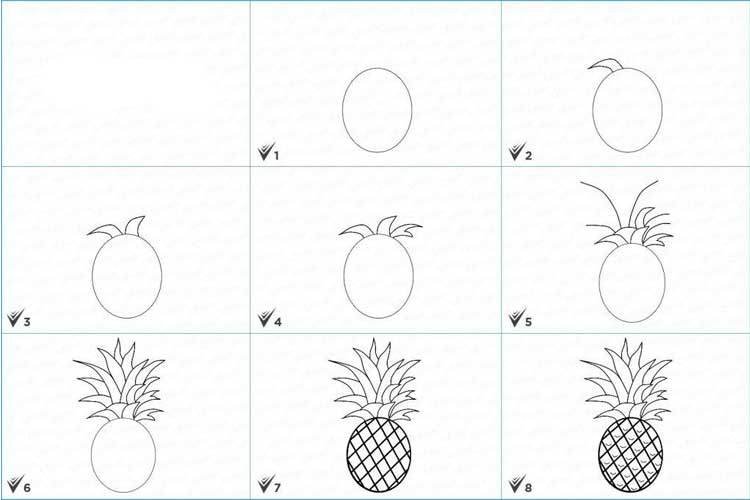 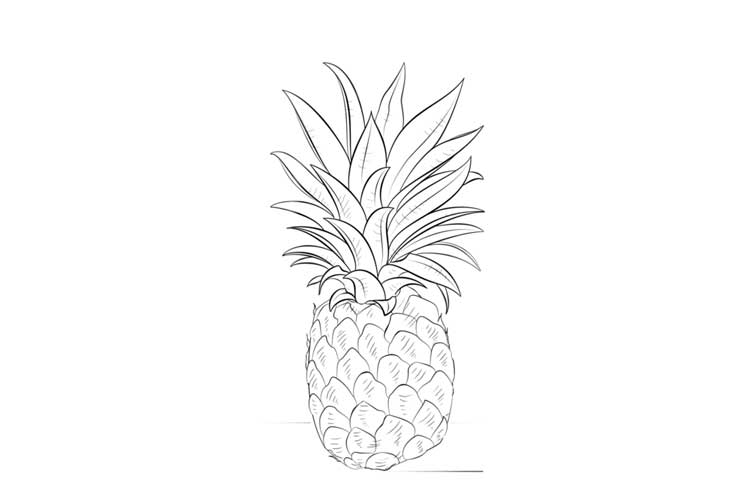 The most interesting from realism is a way of explaining how to draw a pineapple in stages. It takes into account all the features of a real fetus while being sufficiently detailed and straightforward.

First of all, mark the work surface with four strokes, limiting the image. In the lower half, draw an oval. In the upper part, we sketch leaves, as shown in the figure. 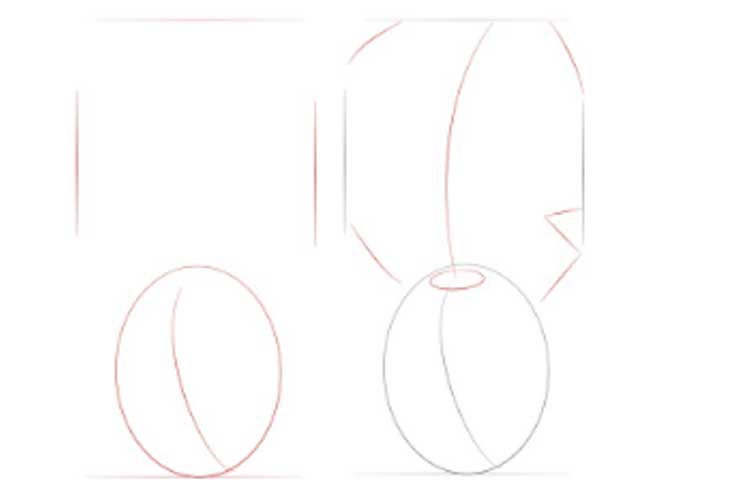 Let’s start the detailing of the picture with the elaboration of the upper part. To do this, we will perform the image of the leaves, starting from the place of union with the fruit. 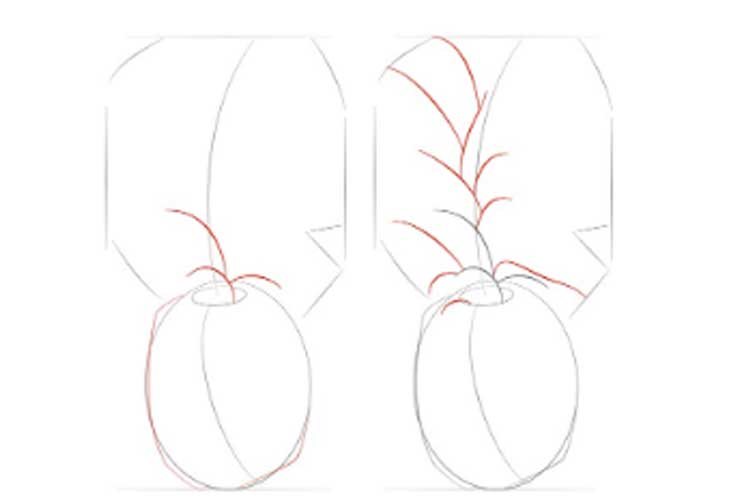 After that, each sheet will complete up to the finished figure. 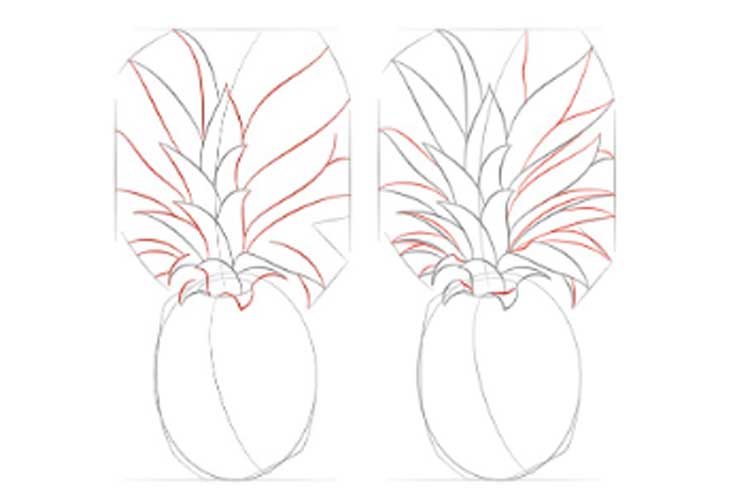 Now it is the turn of the pineapple itself. The surface of the fruit has a scaly structure. We will depict it, starting from the bottom and moving up to the grassy part. 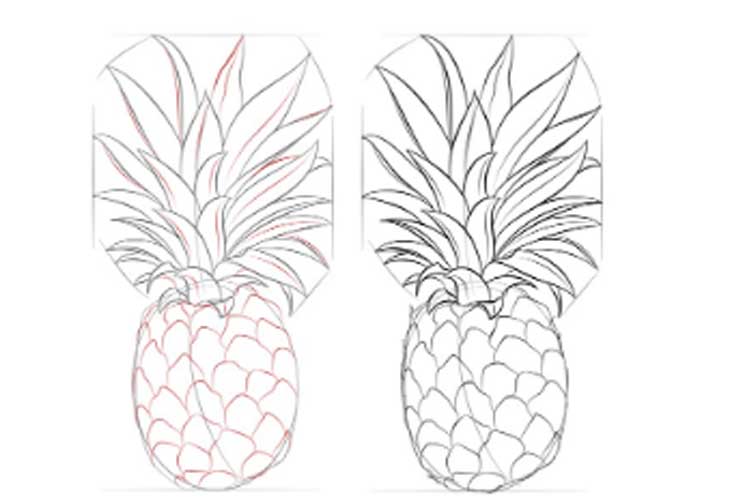 We finish the drawing with the image of shadows on the uneven surface of the fetus and the removal of auxiliary lines.

How to draw a pineapple( 3 option) 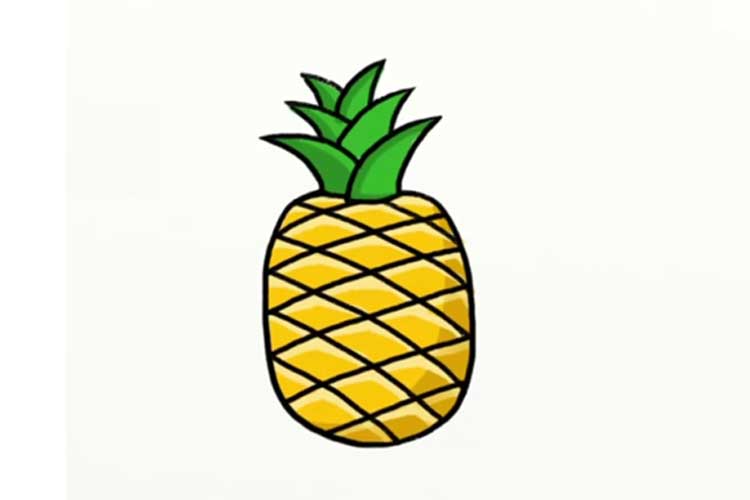 Below is a simple sequence that explains how to draw a pineapple for beginning artists. The drawing is performed immediately with a felt-tip pen, although you can first draw it with a pencil, and then remove the excess. 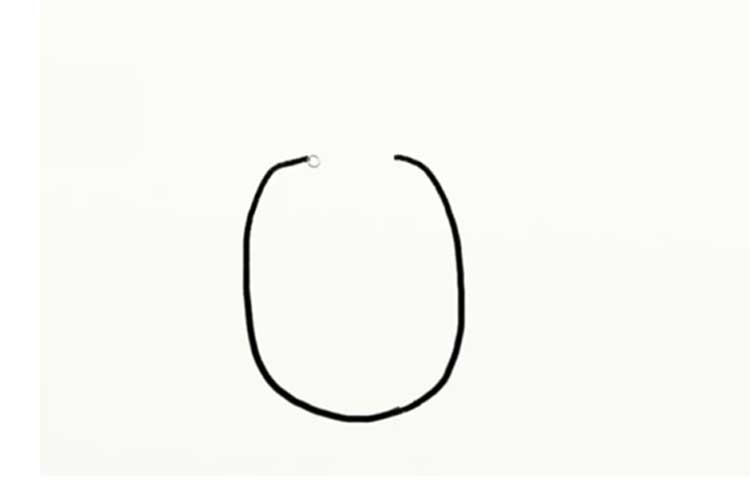 We draw not closed oval. This will be required if you immediately draw with a marker or pen. The place is left for an actual image of the connection of the grass part with the fruit one.
one
Casting draw as if they were growing inside each other. We draw attention to the rounding at the base of their growth. 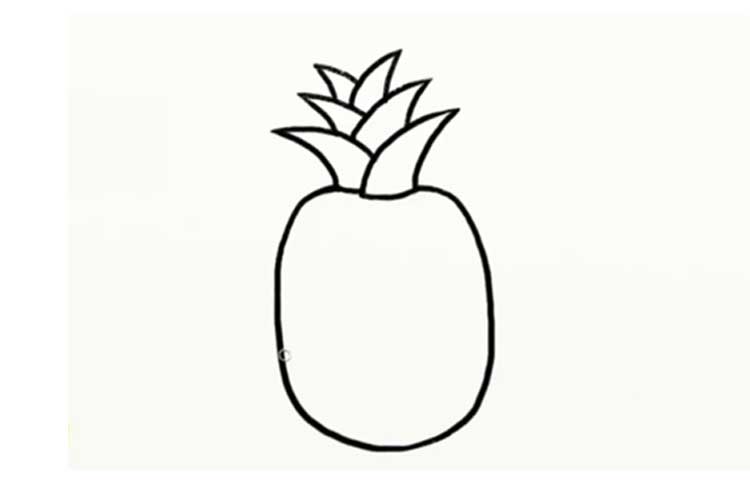 The fruit part is shaded with lines forming a semblance of a reticulum. The figure is ready. It remains only to fill it with colour. 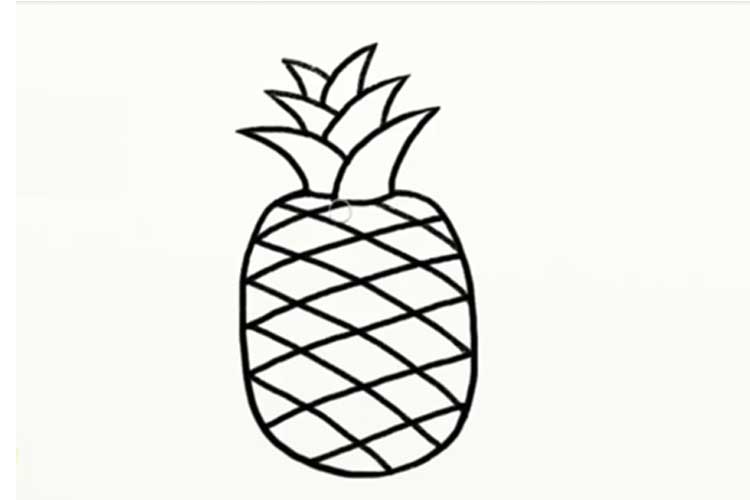 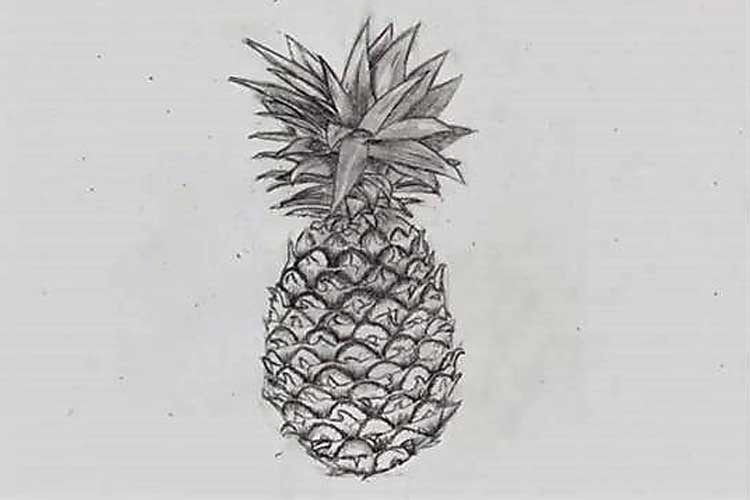 A very nice and useful way to draw a pineapple with a pencil is suggested in this sequence. It is somewhat more complicated than the others, but the fruit will be very realistic, like a real one.
First, prepare a sketch. It looks like a vertical rectangle, divided into eight parts. The upper half will be the leaves; the lower half will be the pineapple itself. The primary markup is specified as shown in the second figure.

Next, the grassy part is filled with individual leaves, and the fruit takes on a characteristic scaly look. The outline is also contoured accordingly. Auxiliary lines can be removed with an eraser and then correct the main ones. 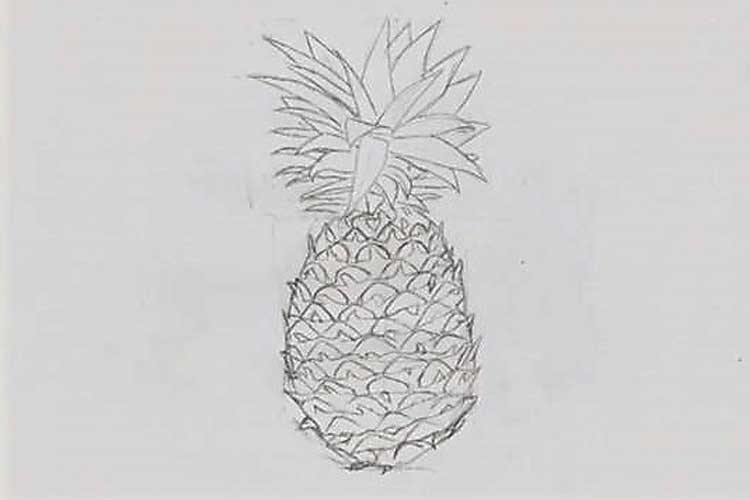 At the very end, shadows are added using shading.

A simple example for a child( 5 option)

The simplest option, proposed below, will show how to draw pineapple for children. Children themselves can take advantage of it; this way is even possible for the youngest artists.
First, draw an oval. On the narrower part of it, we bring the leaves with a straightforward method, as shown in the figure, without each working.

The surface is filled with a mesh that looks like a real pineapple peel. 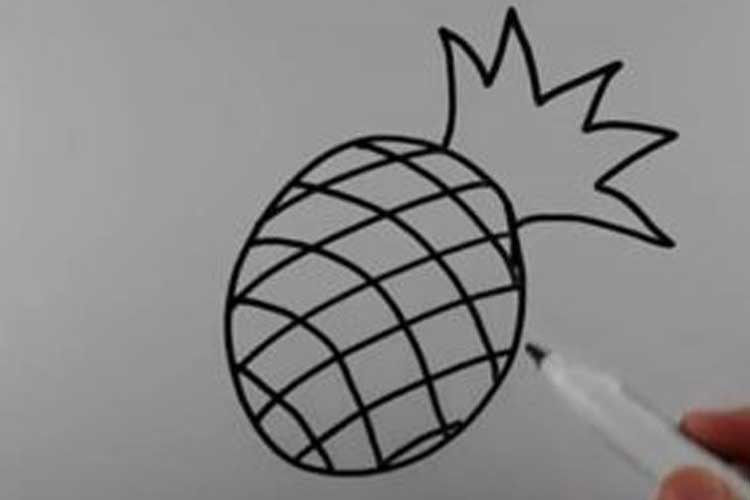 Then we supplement it with small corners for higher similarity. The drawing is complete, and now you can paint it.

How to Draw a Tank Step by Step

Flowers in a Vase Drawing Step by Step 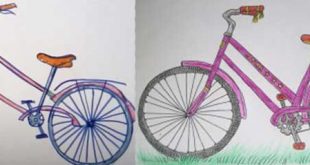 Bike Drawing in 2 variants will tell in this article! Touching upon history, it is …