Drawing skeleton very easy and straightforward. The main thing is to follow all the steps that are described in this guide how to draw a skeleton! We will start by drawing the skeleton’s head first.
The skeletal construction of the human body is the very base of figure drawing. Becoming recognisable with and progressively more informed on this important system will allow you to achieve accuracy and correct proportions when drawing bodies from life, photographs and even coming up with poses from your imagination with no reference! Tips for drawing the human skeleton in three different options you will find in this article!
Usually, skeletons paint for Halloween, the feast of monsters, ghosts and another mischief. In this article, we will demonstrate how to draw a skeleton, one of the main characters of this holiday, as well as films and games. 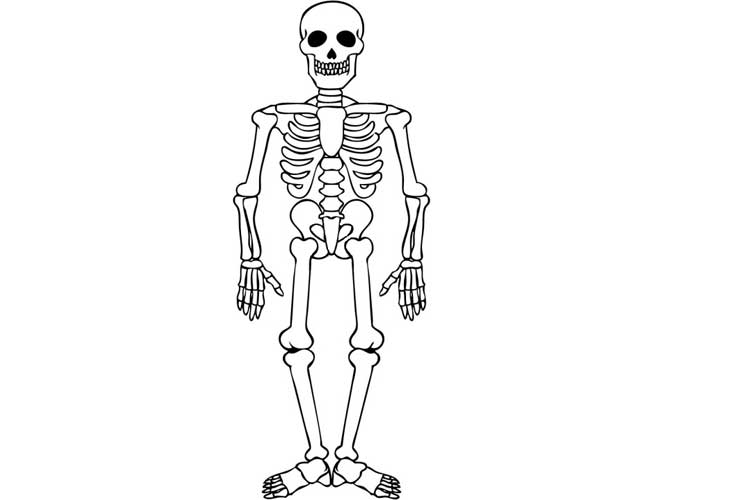 If you already have some experience in drawing people, then this is very good, because skeletons are portrayed a little more difficult because of a large number of small elements.
This example demonstrates how to draw a skeleton step by step in just seven steps. So, prepare your drawing supplies, we will proceed!
The first step is to draw a simple outline, which will help us further when adding some parts of the body. Depicting a sketch with arms, legs and head.Click on the pencil is not much, because in the end we will not need these lines and they will need to be erased. 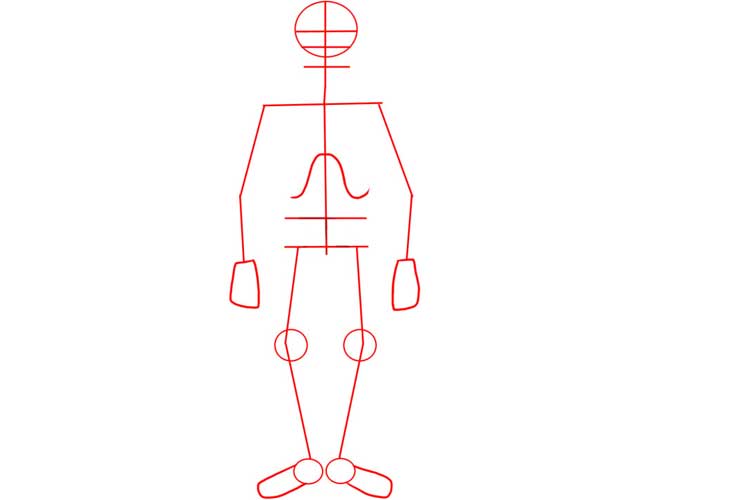 Now slowly build up limbs to our outline. Pay attention to how the skull lines go: the upper one merges with the shape of the outline, the zygomatic bone extends beyond the edges in a semicircle, and then goes inside the head to the teeth, the jaw consists of angular contours. 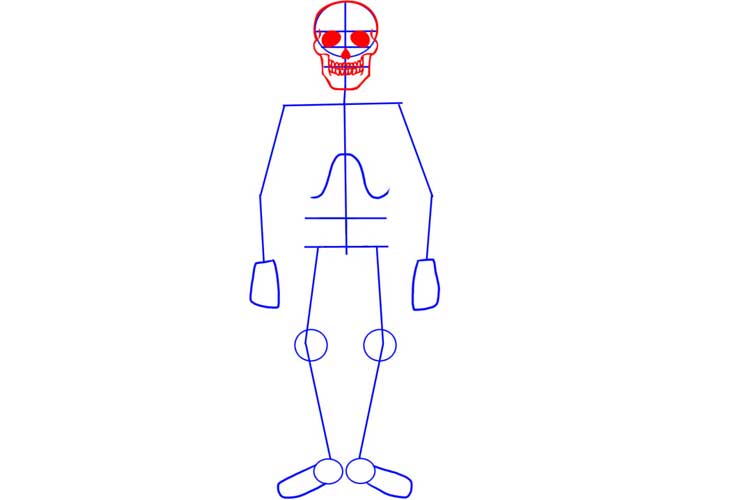 We go down below and draw a neck, shoulders and seven edges on one side and the other. The ribs are perhaps one of the most complex elements of this pattern. Therefore, you have to spend a lot of time drawing them. 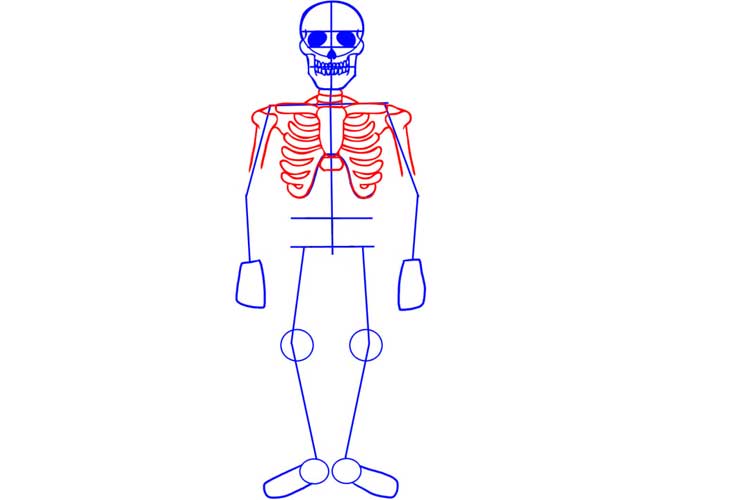 Now draw the hand. The upper part consists of one large bone and the lower of the two thin. Then comes a brush composed of many small elements. 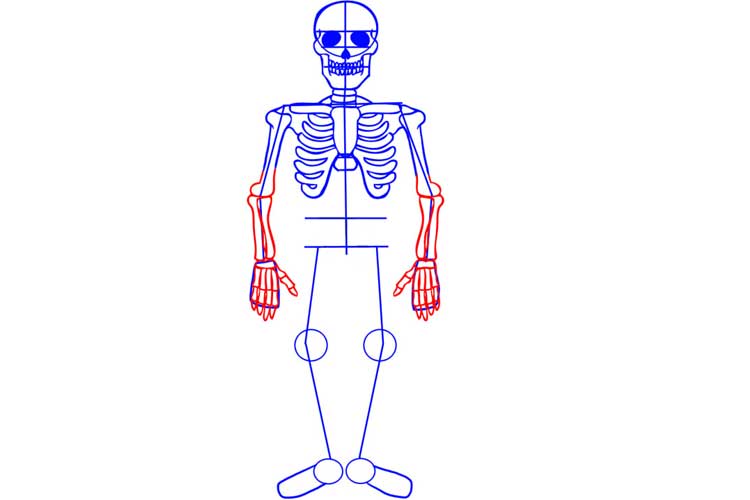 Since the spine is in the back and most of it is not visible behind the rib cage, we draw only three bones. Then comes the hip bone, which is a bit like the ears of an elephant. 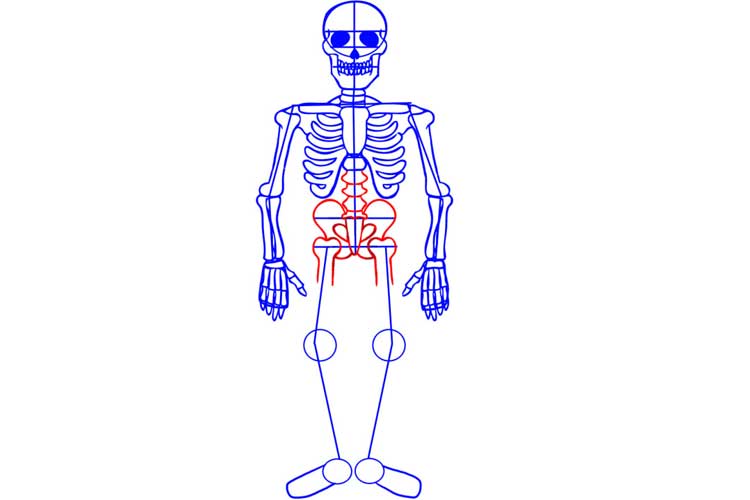 We draw the legs; they are depicted from two large bones and feet. 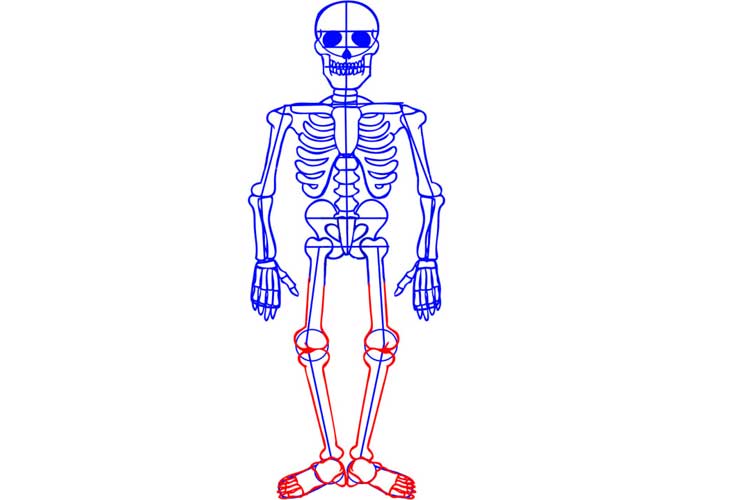 We erase all auxiliary lines and circles, and our drawing is ready!

How to a draw Halloween skeleton 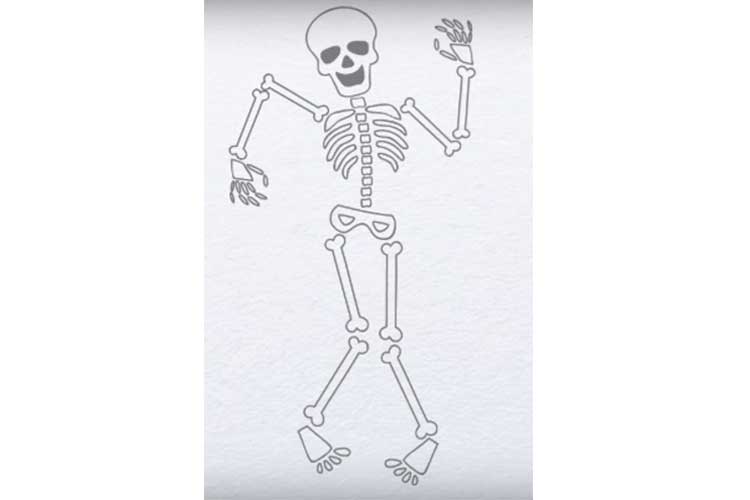 This time we will consider a Halloween version that will show you how to draw a human skeleton. This way of drawing is a little more comfortable than the previous one, so it is perfect for novice artists or children.
First, we draw a skull. We draw a simple outline of the head. Since skeletons consist only of bones and they lack all human organs, we will draw space under the eyes, nose and smiling mouth. 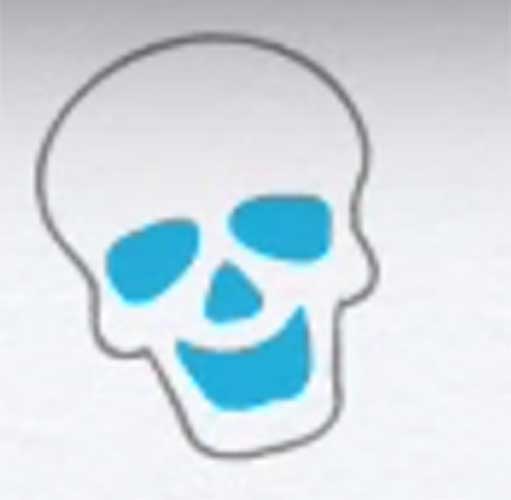 We draw shoulders and a backbone from 10 elements. Since this method of drawing is simplified, the chest will not hide part of it; it will be depicted around it. 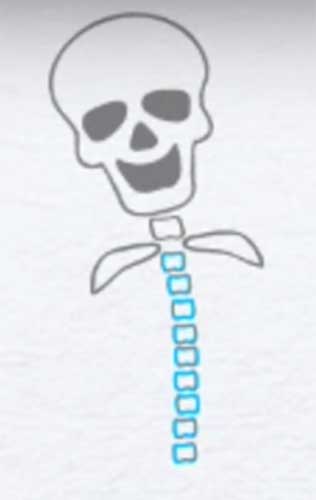 The rib cage in total will consist of only eight small bones. They should be a bit like the shape of a banana and bend to the bottom. The height of the edges of the skeleton should end earlier than the spine. 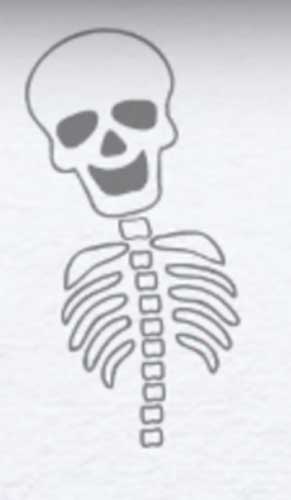 We work on the legs. Since our character is cheerful, he will dance, so we’ll make our legs a bit bent. We will depict the feet as simple as possible, a small trapezium and four fingers in the form of a drop on each leg. 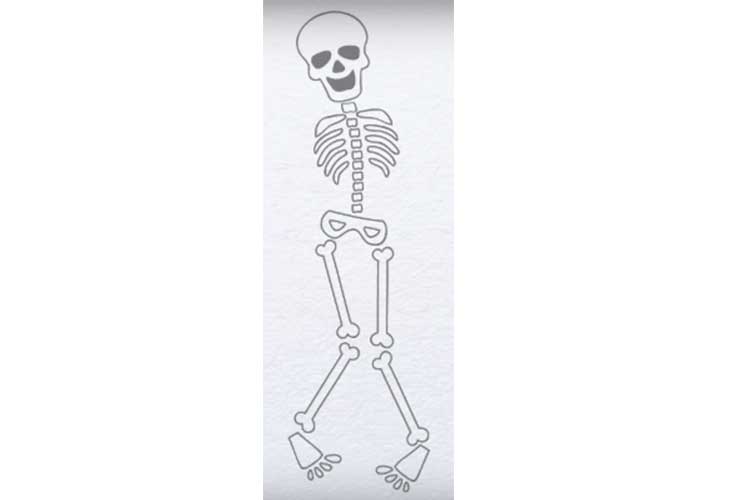 To portray our hero dancing bend his elbows. We will raise one up and down another. The most challenging thing at this stage is the brushes. To depict it, we need to draw a quadrilateral, from which fingers consisting of two ovals will grow. 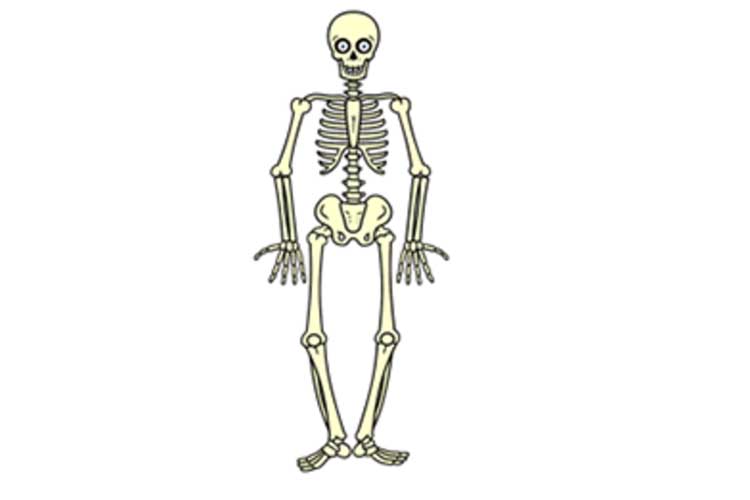 The last example will show us how to draw a skeleton with a pencil and will probably be the most realistic and challenging way to draw in this article. Prepare a pencil, clean sheet and eraser, we proceed! 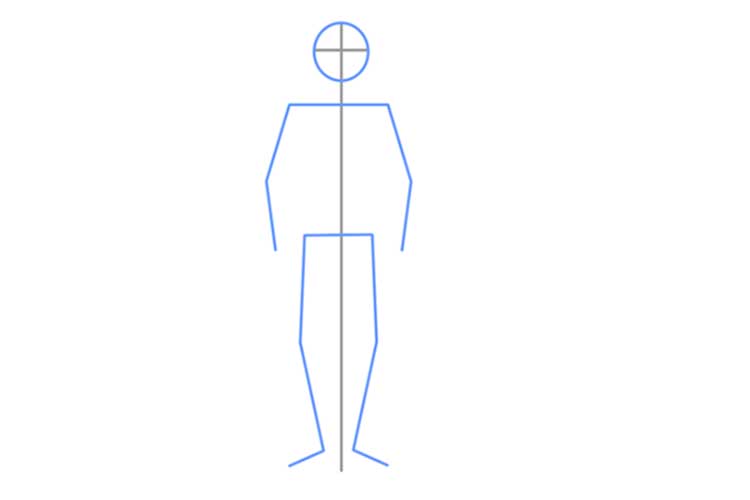 We make the most straightforward sketch in the form of sticks of the body, arms and legs. From above we shall draw a smooth circle, on the place of which a skull will appear later. 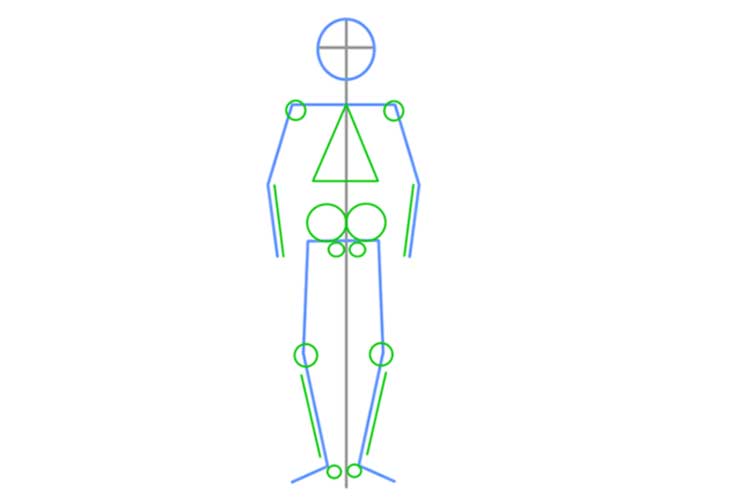 We finalise our sketch and depict small details on it, which in the future will turn into elements of the skeleton body.
The sketch is ready, and it’s time for us to move on to the detail of geometric shapes. Let’s start from above, and we will gradually go down below. So, draw the skull, the two upper bones of the hands and chest. To make the drawing more accurate, be sure to sharpen the pencil before this stage. 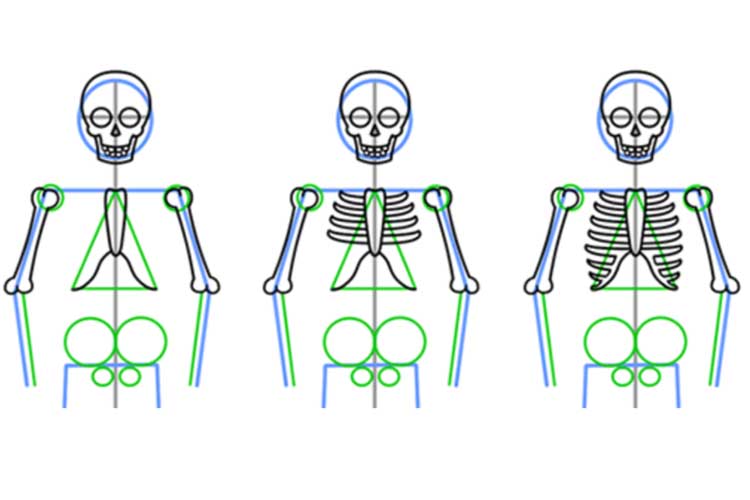 The spine consists of minimal elements but usually does not cause any difficulties when drawing. But the hip bone may seem complicated in the drawing, as it has a very unusual shape. 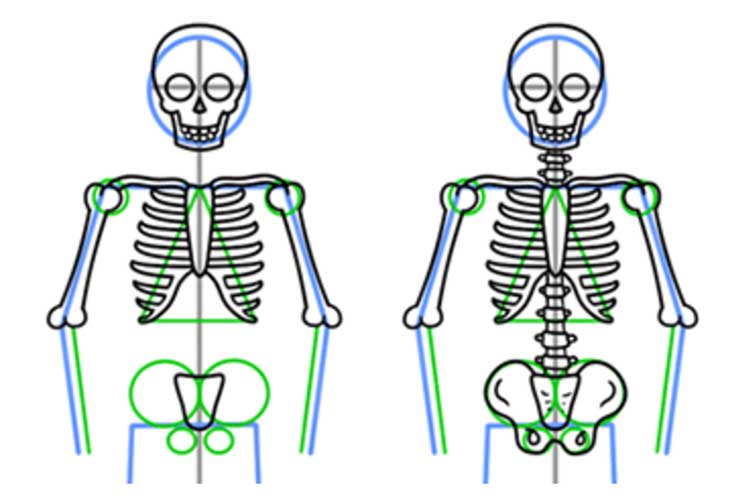 The simplest thing in this illustration is the legs, as they are drawn from two long bones and a foot. 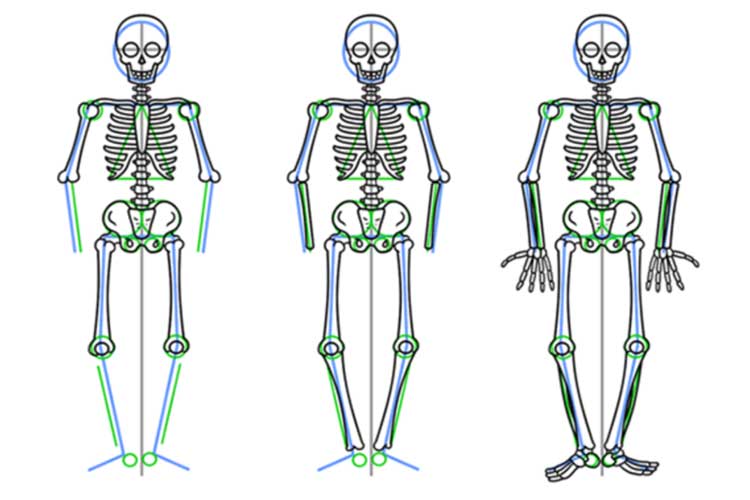 The time has come to finally use the eraser and erase all the auxiliary lines that we no longer need. Also, do not forget to paint the picture in a light colour.