How to Draw a Knife Step by Step

How to Draw a Knife In 2 variants will tell in this article! The knife is the very first type of edged weapon. The most ancient knives existed in the Stone Age. They were in the form of stone splinters, they were not specially processed. Such a knife was handmade by an ancient man with the use of improvised stones.

There were no handles in their design yet. Only sometime later handles began to be made of such materials as wood and bone. Especially sharp knives were made of obsidian. Bone as a sufficiently strong material was widely used not only for the hilt but also for the production of the blade.

About 5 thousand years ago there was an important turn in the history of knives, which can be called a revolution: people finally mastered the manufacture and processing of metals. During this period, knives made of stone were replaced by knives made of bronze and copper. A set of knives made of these metals were often found by archaeologists.

An important advantage of metal knives over stone and bone predecessors was their strength and durability which can in no way be compared with them. Sharpening knives made of metal compared to knives made of stone is much more advantageous because the stone knives in this case quickly wore out and had to make new ones.

There were times when knives were made of gold in some Eastern countries. Such knives were not used as weapons or tools for household needs, because gold as a metal is not very hard. They were used for rituals or sacrifices. Interestingly, such knives are perfectly preserved to this day in all their glory, because gold is not subject to oxidation.

Drawing a knife is interesting and fun to do the main thing stick to our recommendations!
Another important turning point in the history of knives was the beginning of the Iron Age. The iron knife rapidly began to replace the other types of knives: copper and bronze. Then a revolution in the industry began and knives began to be produced in factories. Gradually the design of the knife and materials changed. Knives began to be produced using high technology.

Folding knives, in which the blade is hidden in the handle, are very useful in everyday life and enjoy considerably and deserved popularity. But few people know that their history goes back to the days of ancient Rome. In those days almost everyone had them. The fact is that they were used as cutlery, and coming to visit with them was a common practice. At the same time, folding knives and providing security to their owners, the times were still those days. But back then, such knives were still without draw springs. Production of knives with these useful innovations in their design first began only three centuries ago.

The folding knife was used every day for household needs. It was used to repair horse harnesses, it was also an excellent tool for cutting cups and spoons, craftsmen used it to make tools, it was also used in shoemaking.
Today, you probably can not find a knife store, where they would not sell folding knives, so widespread they were.

How to Draw a Knife Easy (option 1) 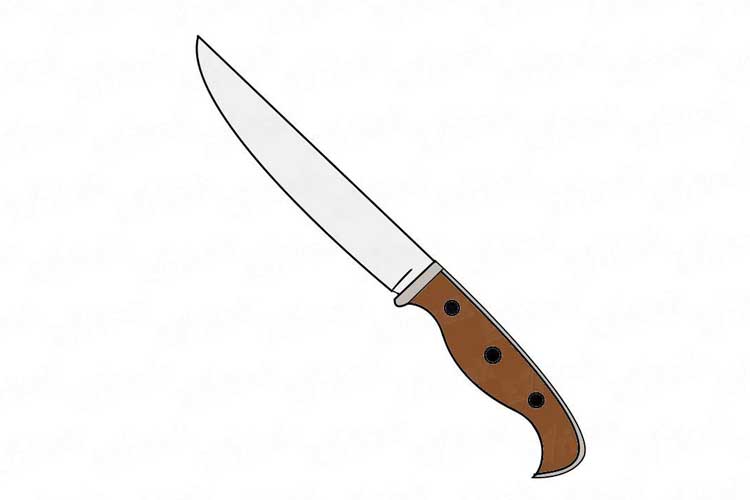 What you will need for the work:
A sheet of A4 paper.
An ordinary pencil.
An eraser (eraser).
It would be nice to have a pencil sharpener.

Step 1
Drawing a knife begins with a handle. We draw a little line on the diagonal of the page. On the right side, the line turns smoothly. 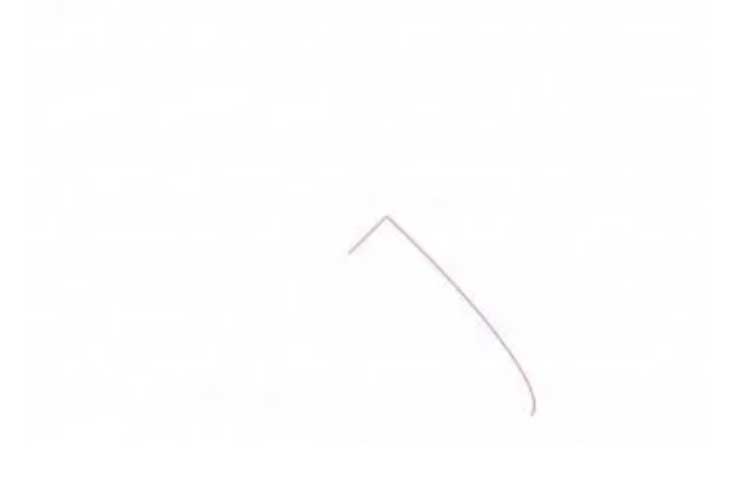 Step 2
To continue the handle, finish drawing a curved line from below. 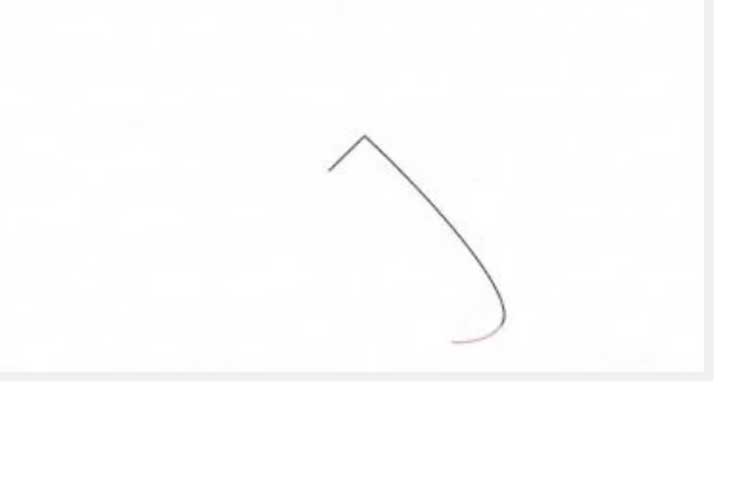 Stage 3
From the bottommost line, it will be necessary to draw an additional line curving inside the drawing. 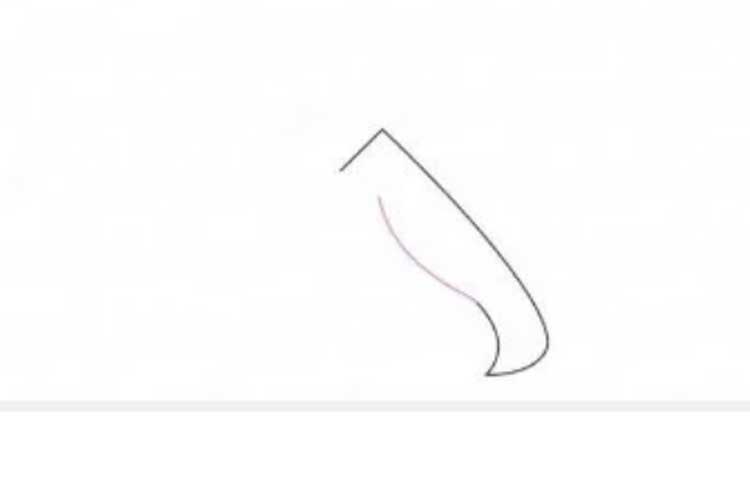 Stage 4
We continue to draw a line upwards, but with a curve from the handle. 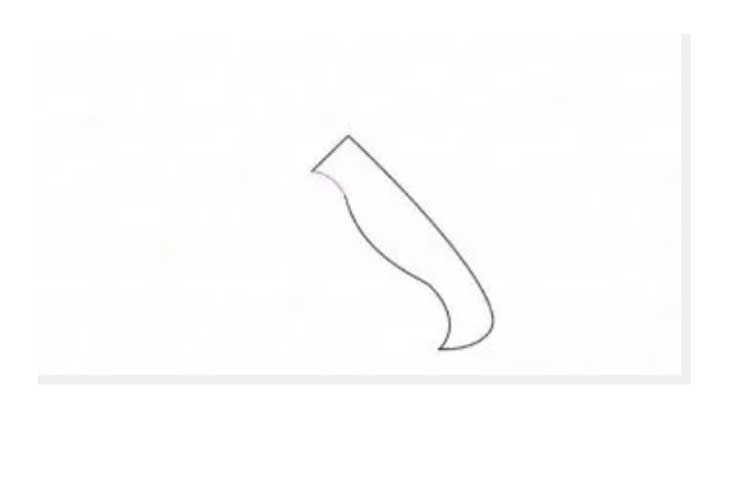 Stage 5
We finish drawing the handle with a small curved line. 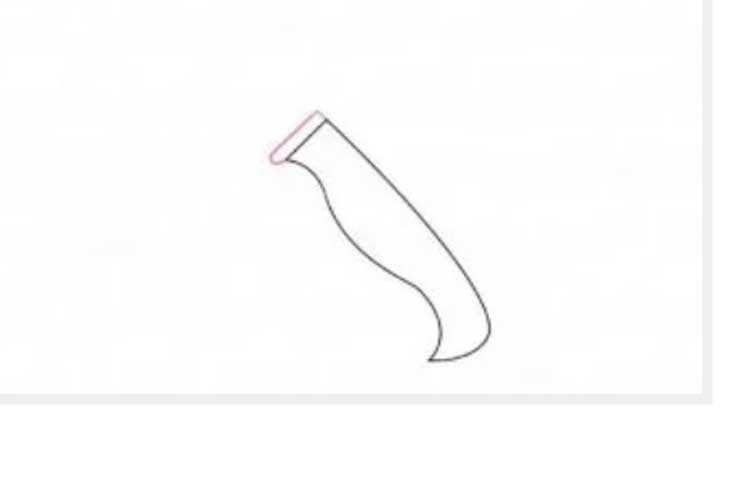 Stage 6
On top of the handle, we finish drawing a small rectangle. This detail will help the blade securely fasten to the handle of the knife. 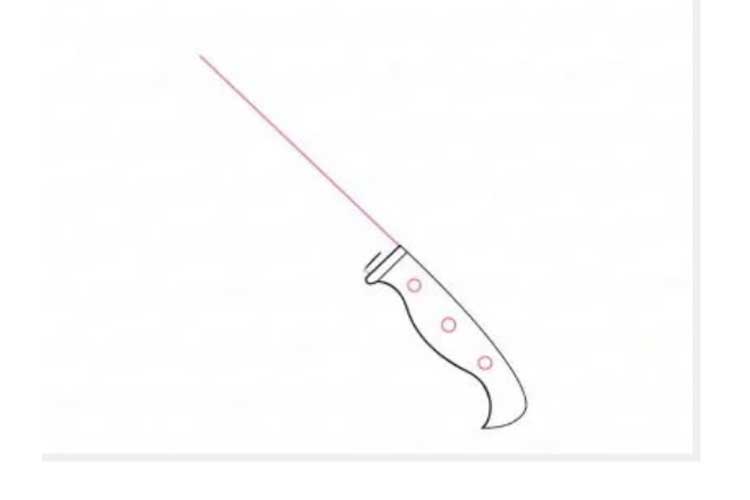 Step 7
Let’s start drawing the blade. To do this, draw a long straight line up from the handle of the knife. This side is not sharp. In addition, we will need to finish drawing three small circles inside the handle, which will represent metal rivets. With these rivets, the blade is attached to the handle. 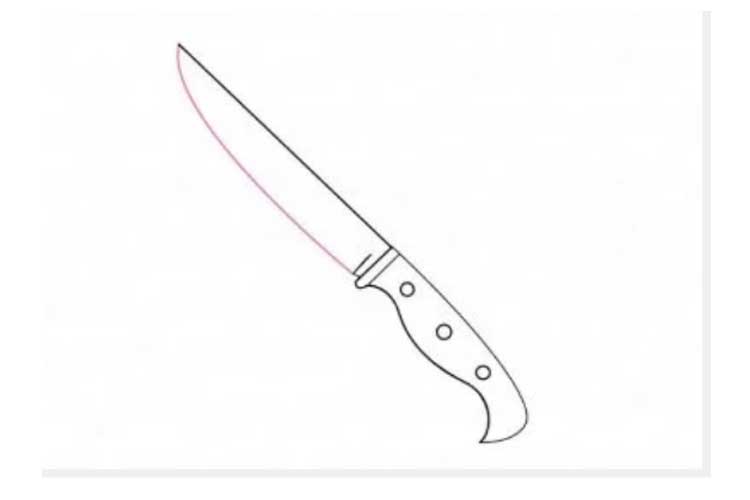 Step 8
Finish drawing the blade with a rounded line, which should be drawn from a straight line. This side of the blade is pointed.
That’s it, the drawing of the knife is ready! To make the knife look more realistic, you can paint it with colored pencils or paints.

How to Draw a Knife Simple (option 2) 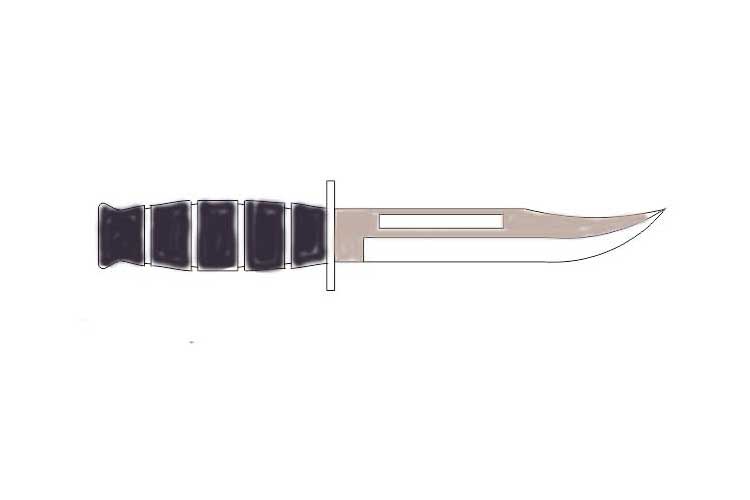 We draw melee weapons in stages:

We draw a straight line, focusing on which we will 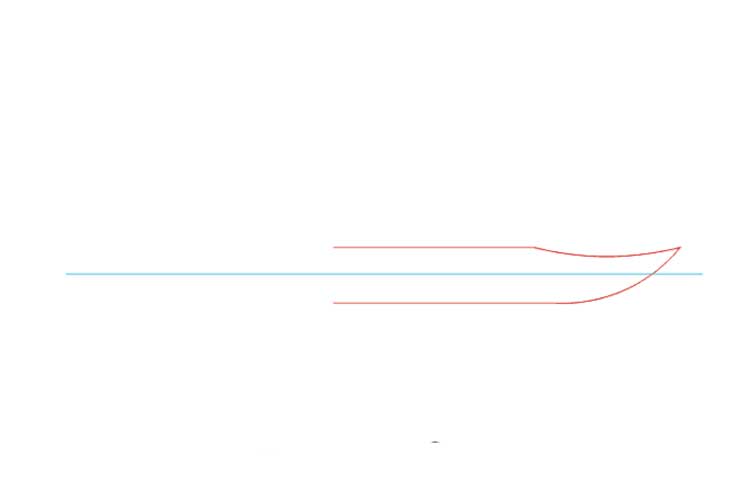 Draw the knife handle and blade: 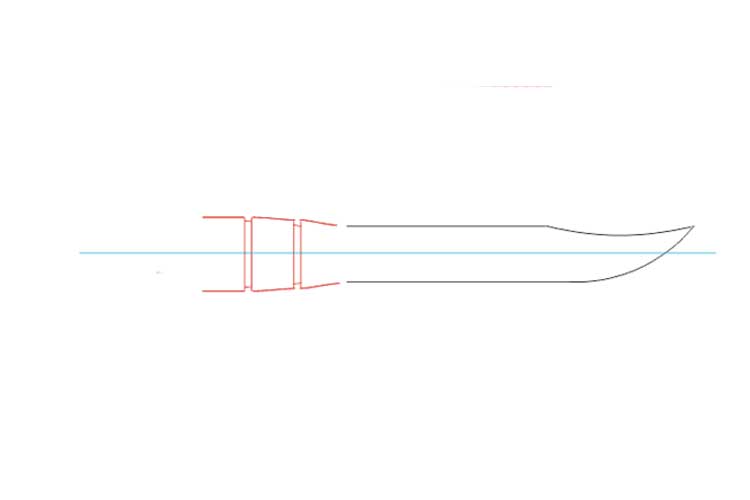 Draw the front of the doge in different colors 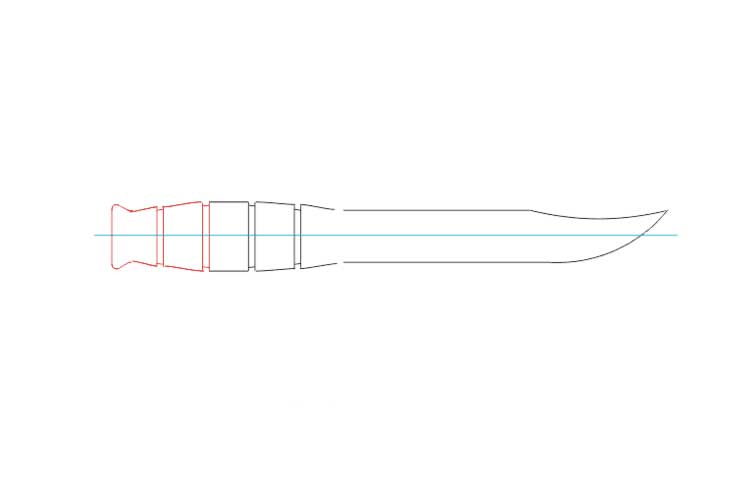 Draw the back of the knife 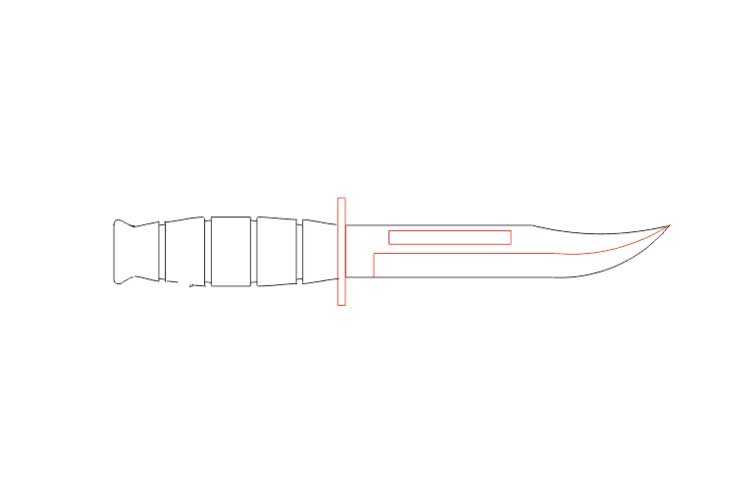 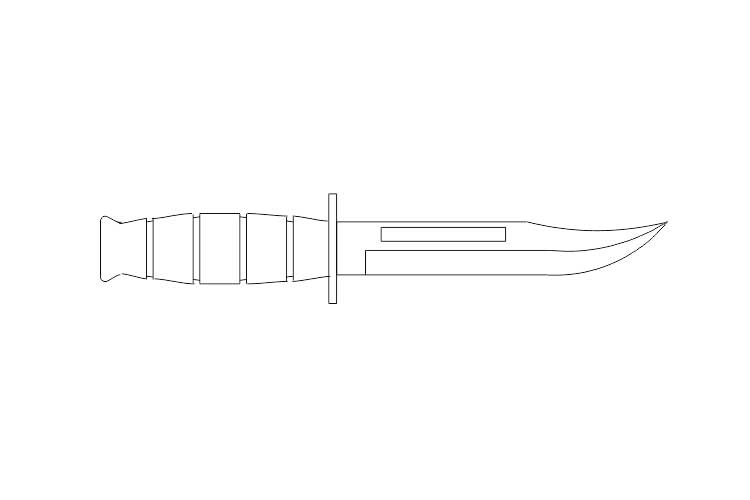